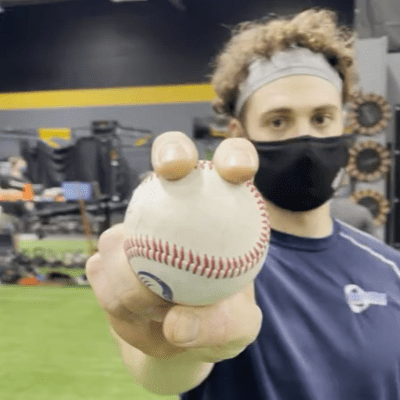 Pitch grips spark a special interest among pitchers – fueled by stories of pitchers developing dastardly pitch profiles with seemingly simple changes. While there are incredible resources that detail different types of grips across the league, such as Pitching Ninja’s Dropbox; to our knowledge there has not been a rigorous public analysis of how changing grips affects pitches’ profiles – granted the availability of tracking tech to do that (from a non-MLB perspective/budget) on a wide basis has been a more recent development.

The first step would be to figure out which grips are the same or close enough to group together for analysis. From here you could average the metrics for different grips (once you come up with a naming/grouping system for that besides just ‘Clayton Kershaw’s curveball’) – but there are a couple confounding factors with this approach that are important to attempt to control for.

We detail some of our thoughts in regards to those here and how we’re approaching that analysis with athletes training at Driveline.

The rest of the blog will discuss the pieces we find most important to track—or be aware of—when figuring out how to adjust a pitcher’s arsenal.

This is the most obvious of the factors we will discuss.

Tyler Glasnow could likely take a splitter grip and still throw a nastier breaking ball than over 90 percent of Power 5 college pitchers. What we really want to answer is whether or not that splitter grip gives Glasnow the best breaking ball he could have.

Regardless of how optimal your grip/cue selection is for an average college athlete, they will never be able to compete with Tyler Glasnow’s breaking ball given his velocity and ability to spin the ball, even if Glasnow is given the worst breaking ball grip possible.

To control for this, we obtain a  “baseline” profile of an athlete’s pitches when they come in-gym. From there, we can then see how differing cues/grips impact the offerings relative to their baseline profile. This gives both the trainer and the athlete some additional context to rule out certain pitch shapes and easily recall optimal grip/cue combinations when they leave the facility or start to lose feel for the offering.

By logging this information, we can more confidently rule out that the athlete isn’t throwing a poor breaking ball due to a poor coaching process. For example, an athlete that is incapable of obtaining sweep without a significant tradeoff in velocity should likely be nudged towards a more gyroscopic or cutter type of profile.

Without knowing what an athlete has tried before, it’s tough to know if they’ve received insufficient instruction on how to throw a breaking ball with sweep or if their grip is at fault. While we certainly don’t believe this is the case at Driveline, we can further objectify that by logging data to strengthen our pitch design process.

An athlete being cued to “throw a sideways curveball” is likely to throw a pitch with a vastly different movement profile relative to being told nothing, much less when cued into  throwing the ball “as hard as humanly possible.”

This allows us to capture potential confounding factors that may be at play when looking for just grip insights. For instance, if we find that a given curveball grip has significantly more depth relative to our remaining menu of grips, we should probably look to see how often it is paired with a cue that would attempt to influence depth.

This not only helps us control for this context prior to jumping the gun on answering “what do different grips do” but allows us to essentially conclude what proportion of causality a coaching cue has relative to a grip adjustment for the average athlete looking to obtain a specific movement profile.

When logging grips, we want to capture as much relevant detail as possible. We also need to be able to group grips together for analysis and don’t want to overburden ourselves with unnecessary information. We settled upon the following intricacies as being of note for logging purposes in addition to index/middle/ring finger placement:

Tilt in Ball position inward/outward + lateral shift towards pinky/glove side.

Pitchers may adjust a base grip outward/inward to slightly change seam orientation and how their fingers come off the ball. Pitchers will often tilt a four-seam grip outward for their cutters in an effort to induce more gyroscopic spin while maintaining a fastball feel at release. For changeups, a pitcher with a 2-seam grip may laterally tilt the position of the fingers towards the thumb – with the intent of getting away from a seam at release and decreasing raw spin.

If an athlete is insistent that his/her grip is comfortable, but isn’t acquiring the optimal ball flight metrics, a simple grip pressure adjustment might do the trick. A pitcher that is cued to emphasize middle finger pressure would be expected to be around the ball more at release. Pitchers that prioritizes index finger pressure on a slider, may find themselves shifting the spin direction of a pitch upward and taking a pitch with slurve characteristics closer to slider territory.

Additionally, we’ll look to define whether or not the thumb is “flat” or “tucked.”

Spiking the ball may be a natural method to get more middle fingertip pressure on the seam without having a coach internally cue it. Additionally, the index finger can interfere with the spin direction of a breaking ball when it’s released in conjunction with the middle finger. By applying a spike alternative, this may result in a more downward (closer to 6:00) spin direction for curveballs.

Conversely, relieving a breaking ball of a spike may result in a more upward spin direction (9:00-12:00) which could be beneficial when working on optimal slider shape.

Grip depth is not hypothesized to be correlated to anything beyond case-by-case comfort. Different hand sizes may be a reason for depth of grip changes, some need to choke a four-seamer in the palm while others need to leave some space between the palm and the ball to achieve a certain movement. Changing the depth of the grip may also allow an athlete to find an optimal seam to pull off of… or simply be a manipulation to get the thumb to a more comfortable location on the ball.

The one exception could be the changeup – in which athlete’s may “choke” the grip in an effort to lessen spin and velocity on the pitch. Though some athlete’s often achieve both of these by gripping the ball in the fingertips “like an egg” as well.

4. Intent Level (Fastball Velocity) during the session for Breaking Balls

The most straightforward method of improving the “stuff” characteristics of fastballs as well as breaking balls is to simply throw them firmer.

13/30 hurlers fell under this category. Simple, but effective.

Controlling for SL movement, 1 FB tick tends to convert to ~.75 ticks to the Slider and ~8.5 units of Stuff pic.twitter.com/PjROUsie8k

The faster you throw your fastball, the harder we’d expect your breaking ball to be as well. Looking at MLB data when pitchers gain 1 mph on their fastball, we see slider velo climb 0.75mph as well and improve in stuff+ by 8-10 units.

There’s a couple reasons we want to control this.

For one, pitch design sessions are seldom thrown at true game intensity. Velocities are generally down a bit relative to in-game averages because of decreased adrenaline. In addition, athletes may gain velocity between our baseline and retest arsenal assessments.. For instance, an athlete that has an 85 mph fastball in April, and shoots up to 90 by his PD session in August needs to have that context controlled for, as it isn’t as if any pitch design specific work has really improved his breaking ball to that point.

Intent level and how an athlete “feels” also varies session to session. Some PD sessions are done at 70% RPE, others at 95% RPE. Breaking balls will always play better in the 95% sessions, as there’s more fastball velocity to tradeoff to secondary offerings. However, we are mostly concerned with how the shape of the offering relates to that day’s fastball velocity.

To control for this, we  scale the athlete’s velocity to always be big league average for their handedness. In 2021, Righties averaged 94.1, lefties 92.8. We’ll then apply the velocity adjustments toward the breaking ball. An example of this is shown below.

By controlling for and tracking all of the above, we aim to shed more light on what changes impact ball flight metrics and how to best leverage those for arsenal development. From this library of data, we hope to be able to assess the effectiveness of grips, cues and various combinations of them to create a validated hierarchy of options for athletes designing or refining pitches. This would allow us to shorten the learning curve for pitchers and allow us to allocate effort in ways that are most likely to work for a specific athlete – focusing on specific grips, or knowing when to move on to trying a different pitch/approach.

This allows our athletes to be more efficient with their training economy, shortening the duration it takes to reliably execute a pitch shape from say 4 weeks to 2 weeks. Ultimately leading to the end goal of allocating more time towards mound development and the command of the offering.