Home Blog Pitching Pitch Design How to Throw a Slider 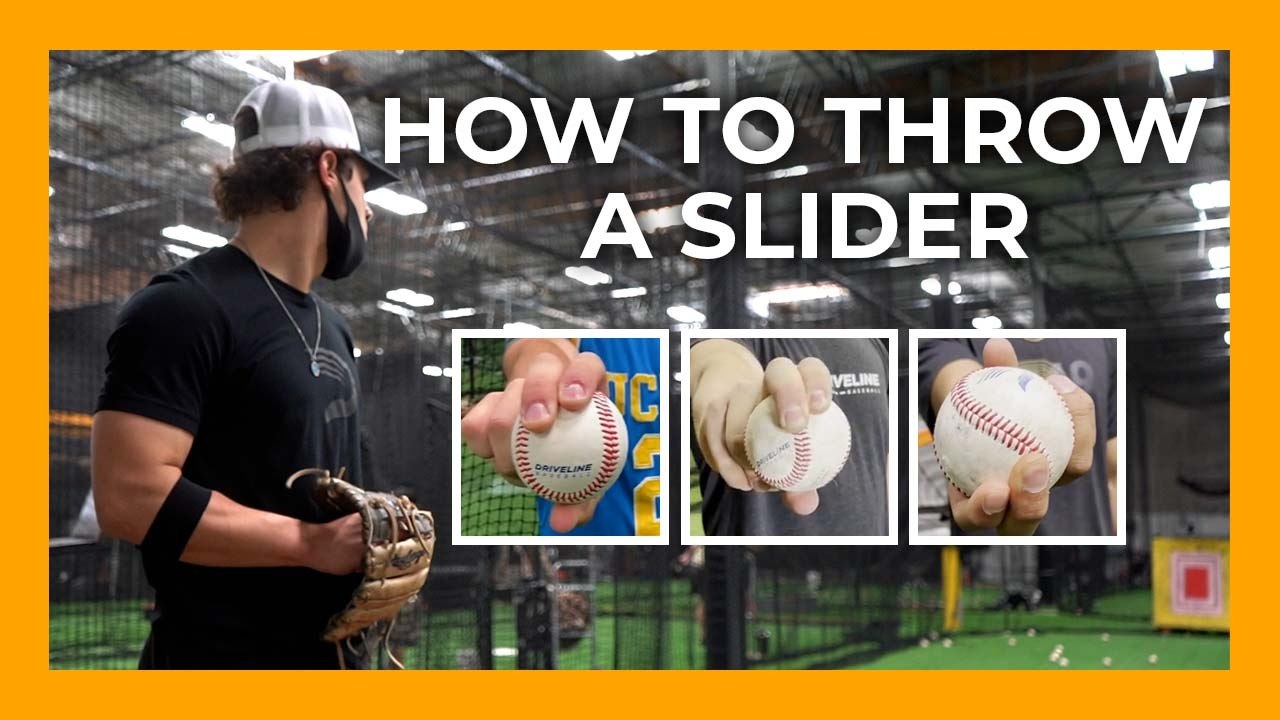 Welcome to Part 5 of our “How to Throw” series: How to Throw a Slider. In this segment, we are going to cover sliders, the breaking ball best known as one of the nastiest (and most valuable) pitches in baseball. We’ll analyze why sliders move so effectively and detail different grips that you can experiment with on your own.

Overview of a Slider

A slider is a breaking ball that moves in many different shapes and sizes, predominantly with glove side action and 10-15 inches of drop off the FB.

This movement is created because the ball will rotate with a combination of side spin and gyro (or bullet) spin. Sliders are also usually thrown faster than a curveball and are roughly 6 to 10 mph off the fastball.

As mentioned, there are a few different families of sliders, any of which can be effective in a player’s arsenal if thrown with the right metrics. Since each SL type can be successful, it is especially important to understand what type of movement your pitch has in order to decide how to improve upon it.

How to Grip a Slider

The most common grip type among our athletes is referred to as “SL 2”. It is a standard grip that is held with the fingers slightly off-center between the inner seams. The middle finger is placed directly on a seam, while the index finger is on the leather. Both fingers are important at release to impart the necessary spin that leads to a slider’s desired movement.

The thumb is positioned for support on the opposite side of the ball and just off-center. Its position can be adjusted based on comfort. Compared to a curveball, the slider may not be tucked as deeply into the palm—although this varies between athletes.

The knuckle of the ring finger is placed on the side of the ball in order to help maintain control, while the pinky finger is completely off. After you’ve positioned your fingers comfortably, you should hold the ball with a decent amount of pressure between your thumb, index and middle fingers.

How to Throw a Slider

Throwing a slider is similar to throwing a curveball, with a few minor differences. Take a look at the example Edgertronic footage below.

Notice how the pitcher’s hand is slightly off to the side; this enables the fingers to come around and pull down on the side of the pitch to produce side spin or gyro spin and, ultimately, the desired lateral movement.

One of the cues we recommend is to “slash the zone” with the ball, or to “throw it like a football.” The pitch should feel as if it “slides” out of the hand upon release.

Depending on your success, the pitch should move towards your glove side and appear to drop during the last few feet. If you don’t have access to high-speed video, you can pay attention to the type of spin and movement the ball has during catch play or bullpens. It might take time to develop a feel for this pitch, but further practicing and using different cues will help in your development.

If you’re prepared to throw on a Rapsodo device, you can analyze your pitch’s movement profile using the horizontal and vertical break plot. Note that the following graph represents right-handed pitchers and that for left-handers the results would be the mirror image.

The H&V break plot shows a spectrum of different sliders, which are highlighted in blue and located to the left of the y-axis. As shown, these pitches (from a RHP) display negative horizontal movement and a minimal amount of negative vertical movement.

As stated earlier, there are varying slider profiles. Referencing the break plot, a “frisbee slider” would fall further from the y-axis, while a “gyro slider” would fall closer to the centerpoint and a “slutter” would fall above the x-axis with a slight amount of horizontal movement. Lastly, a slurve would end up in between the blue and yellow baseballs above.

We should note that, while some slider types outperform others across a given sample (for example, frisbees tend to outperform slurves), every pitcher will find a grip and SL type that is best suited to their skills, arsenal, and comfort level (not every slurve is worse than a frisbee).

This analysis should give you an understanding of the different types so that you can analyze them when you practice, and ultimately decide what is most effective for you.

We’ve seen up to six different distinct slider variations, check out the video below to learn about them!

Below we have listed additional grips and cues. You’ll notice five other slider grip types. Each grip will vary between either seam orientation or index finger usage.

The differences between SL 1, 2, 3 and 6 are seam position. While both the index and middle fingers are placed onto the ball, their location differs. SL 1 is held similarly to a close four-seam fastball grip. The fingers are off-set to the side of the ball, with the finger pads positioned on the seams.

SL 3 has the fingers placed between the inner seams, but unlike in SL 2, they are farther up and closer to the horseshoe. SL 6 continues along that same path, and in this case utilizes the majority of the horseshoe.

SL 4 and SL 5 share commonalities with grips 3 and 6 in regard to placement on the ball, but the main distinguishing factor is the use of the index finger. This type of grip starts to resemble a “spiked slider.”

In those examples, by digging the tip of the finger into the ball the pitch becomes “spiked.” The amount of pressure imparted by the fingertip will vary between athletes based on comfort. Since most of the work imparting spin is done by the middle finger, you’ll normally see it positioned on a seam, while the “spiked” index finger gets out of the way and allows the middle finger to maximize its force onto the ball.

Additional cues: “Throw the back of the hand”, “Throw it like a football”, “Pull on the side of the ball”, “Slash the zone in half diagonally”

The slider is a pitch that can present a range of movement profiles, but will mainly display an element of glove side sweep and a noticeable amount of drop relative to the FB. A mastered slider can be a weapon for any pitcher. Understanding why this pitch type moves and how to throw it can provide the momentum you need to create one for yourself!

By Driveline Baseball
Share this article
6 Likes | 0 Comments
TAGS FOR THIS POST: Grips, How to Throw, pitch design, pitching, Slider