How do you improve upon a season in which you were named an All-American? In his freshman year at Oregon State, Travis Bazzana hit .306/.425/.478 with 16 doubles and 6 home runs enroute to Freshman All-American and All-Pac-12 honors. While most players and coaches would use the old “if it ain’t broke, don’t fix it” mantra, Travis came to Driveline this summer with the goal of hitting the ball harder and making better contact with pitches up in the zone.

Being able to measure how a hitter’s body moves throughout the swing is critical for understanding how to improve hitting performance. No two athletes share the exact same movement pattern, but there are common positions and movements that the best hitters in the game routinely demonstrate. Elite level hitters also have an excellent feel for what their strengths/weaknesses are and how they can tailor their game to address them.  But how does one approach development with elite hitters so that they improve their deficiencies without sacrificing the characteristics that make them special?

While utilizing technologies like Blast Motion and HitTrax to track the bat and ball-flight is a great way to monitor the outcome of the swing, motion capture is invaluable because it allows one to understand the underlying mechanisms leading to those outcomes. In the past, coaches and athletes have used 2D video as a way to identify and monitor changes to a hitter’s swing but this is subjective and doesn’t tell the full story of how the hitter was producing the swing, especially in elite hitters when the margins are smaller. This is why we use motion capture,  which allows us to quantify the movement of the swing and get at the smaller training margins that exist when working with elite-level athletes. To see how motion capture can be used to help elite hitters upgrade their swing, let’s take a look at data from Travis’s assessment in June of 2022 and his retest in August.

WHAT CHANGED AND HOW DID IT CHANGE?

Prior to coming to Driveline, Travis already possessed elite-level abilities in two of the three components of Driveline’s “Big 3”: bat-to-ball skills and swing decisions. In other words, Travis was already great at knowing when to swing and making solid contact when he did, so increasing his bat speed and lowering his attack angle would improve his ability to hit for power and cover all parts of the zone.

This is where leveraging biomechanical data from motion capture assessments makes all the difference in monitoring movement changes and ensuring that the hitter isn’t creating new problems for their swing during training. When comparing the data from Travis’s initial motion capture assessment to his retest assessment, some glaring changes in his swing depth, posture, and how he was “turning” the barrel appear, which likely played a role in his improved bat speed and attack angle. 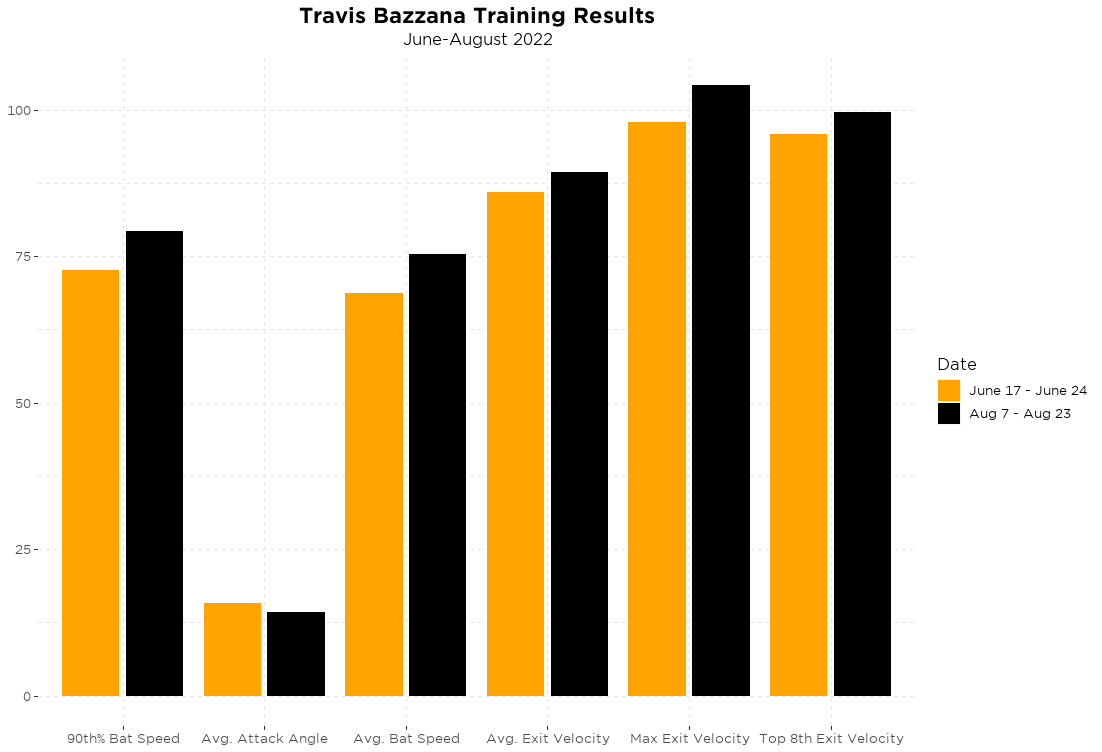 One of the first adjustments Travis’ hitting trainer, Andrew Aydt, suggested for Travis was to focus on maintaining a more upright posture in his stance and swing. The thought was that this would produce less side bend in Travis’ swing, creating a tighter rotation and allowing him to make better contact with pitches up in the zone or pitches with lower vertical approach angles. Using motion capture data, we can look at the angle of the torso throughout the swing to quantify side bend. 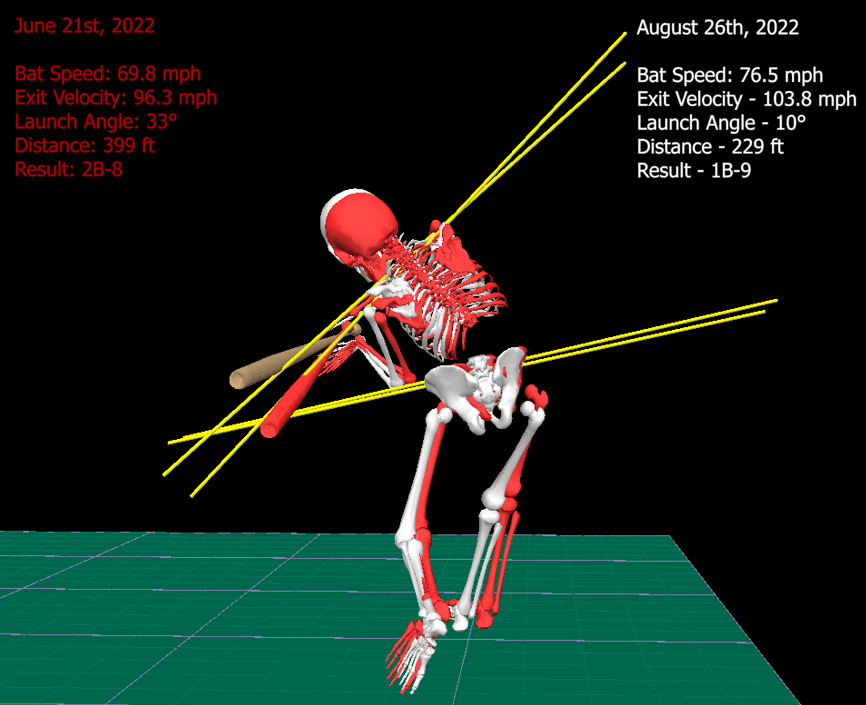 When comparing Travis’s initial assessment in June with his 6-week retest, the decrease in side bend is easy to see and allows him to be in a more upright position that gets his lead arm to maintain a more flat swing path as he rotates through contact. As you can see, the 6.98 degree decrease in side bend was all it took for Travis to place his body in a position to generate a flatter swing plane.

Being able to measure the amount of side bend a hitter has can tell you a lot about how flat or steep their swing is, but to know for sure we have to look at how the barrel is moving through space. To do that, we can look at the total vertical displacement of the sweet spot (a point measured 6 inches from the end of the bat) during the swing to see how flat or steep it is. In other words, we are looking at the difference between the highest & lowest vertical positions of the sweet spot during the swing. When comparing Travis’ two motion capture sessions, his average vertical barrel displacement decreased by over 5 inches, indicating a flatter swing arc.  As you can see, his bat traveled a greater distance vertically in his initial assessment (red), creating a steeper swing profile that doesn’t allow him to match planes with pitches up in the zone.

Swinging the bat faster and generating a flatter swing plane is great, but it doesn’t really matter if the hitter is “pushy” with their hands or lacks adjustability and the ability to turn the barrel correctly. There are likely several different factors that can lead to a pushy swing, but we can quantify this with motion capture data. By looking at top hand max wrist supination in tandem with the rate at which the hitter is supinating their wrist from the loaded position until contact, we can get a pretty good sense of a hitter’s ability to resist releasing their barrel too early. More top hand wrist supination could tell us that the hitter is turning the barrel too early. As we can see, Travis decreased his wrist supination, demonstrating that he wasn’t releasing the barrel too early. This can be seen in the image below with a higher overall value at the end of the graph or around contact.

So, let’s do a quick recap of what exactly Travis Bazzana was able to do during just six short weeks of training at Driveline this summer: he increased his bat speed by 5 mph, increased his top 8th exit velocity by 4.3 mph, and developed a flatter swing that will allow him to match his swing plane to pitches up in the zone. We can quantify those things and much more, especially as the integration of ball-tracking systems into motion capture systems improves.  Monitoring a player’s exit velocity and bat speed shows what an athlete’s ability is and this type of technology has become much more prevalent in player development thanks to commercially available systems, the same cannot be said of the kinematic variables that help explain to athletes and staff the how of their development. As we’ve seen happen with the development of pitchers, the day will come where motion capture and biomechanical data are prerequisites for any organization that is serious about developing hitters.