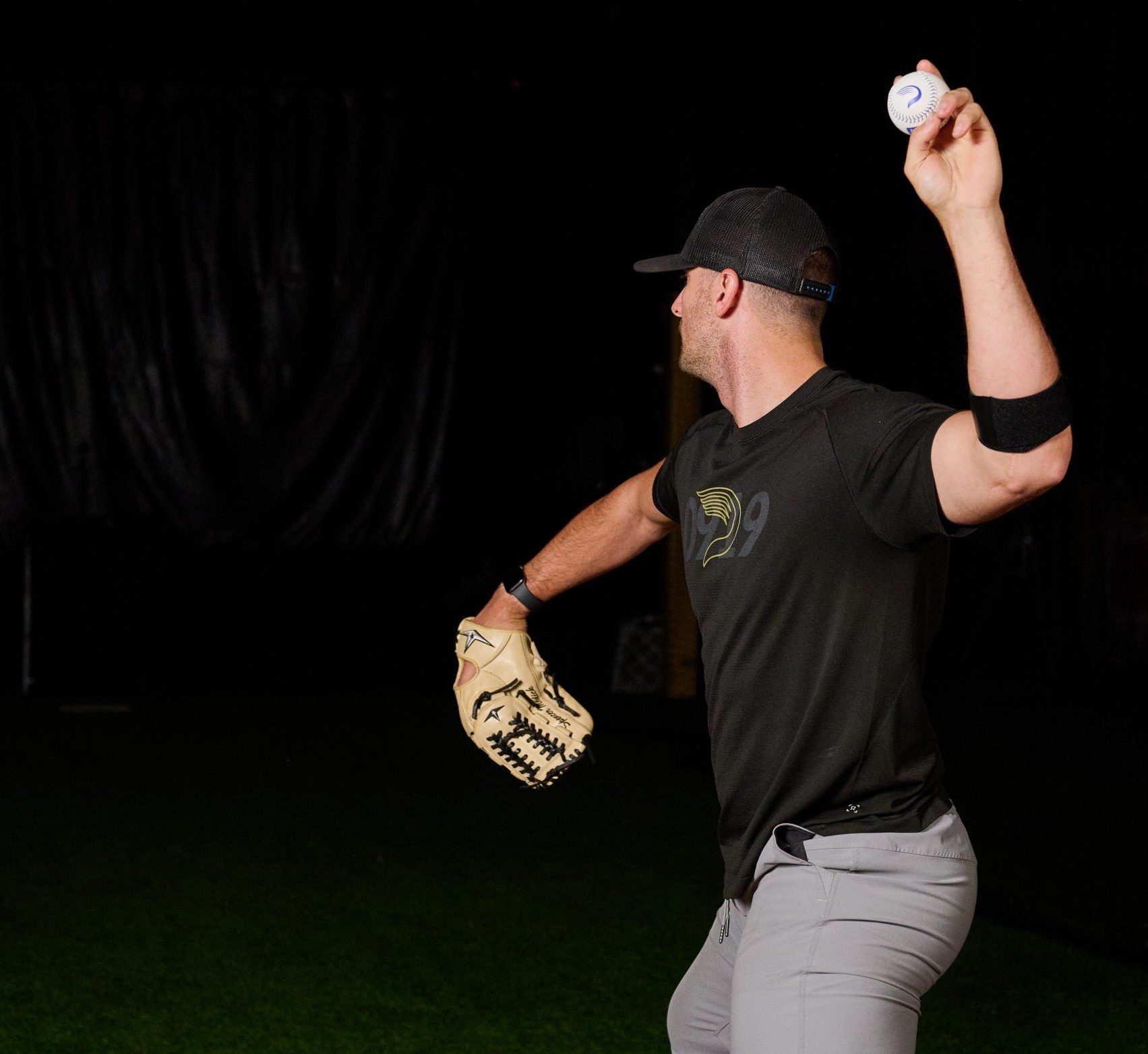 Beyond that, we’ll also look at different variations of four-seam fastballs based on their movement profile. Plus, some of the more common cues and adjustments that are used when looking to improve your fastball.

Overview of the Four-Seam Fastball

The four-seam fastball is the most commonly thrown and arguably most important pitch in a player’s arsenal. Synonymous with high velocities, a pitcher’s four-seam fastball typically exhibits some degree of backspin and arm-side movement.

A four-seam fastball differs from other fastballs, such as two-seamers or sinkers, in that it shows greater vertical movement, less sink, and a higher average velocity.

This grip is the most common four-seam fastball grip that we see at Driveline.

Depending on hand size, the ring finger is placed on the side or below the ball. While the pinky finger is entirely off. This grip isn’t one size fits all–the most important thing is that you position your fingers so that you can hold the ball comfortably in your hand.

How to Throw a Four-Seam Fastball

As you throw your fastball, aim towards a target and pull down on the seams using your index and middle fingers as you get close to release. A cue we like to use when throwing is to “yank” the ball down as hard as possible, as it should feel as if the ball “shoots” out of your hand.

Here is an example from high-speed footage of a four-seam fastball. Watch how the pitcher gets directly behind the ball at release and throws the ball with close to perfect backspin:

We expect four-seam fastballs to move straight, but with increased horizontal movement, the lower your arm slot gets.

For example, if you throw from an over-the-top position, you’ll likely have almost no arm side run, in contrast to a pitcher who throws from a low ¾ slot, whose ball we’d expect to show a higher amount of run.

While each inch of fastball movement matters a lot, it matters more for older athletes who throw harder. Younger athletes should not only focus on throwing hard and to a target but also try to get behind the ball with backspin. Throws in the field will be with a four-seam grip, and we’d want to get good ball flight when playing defense.

If you’re throwing on a Rapsodo device, the movement plots below visualize where you’d see a four-seam fastball fall on the horizontal and vertical break plot.

It’s also important to understand that a pitcher’s arm slot or release point matters when discussing movement profile. The same vertical and horizontal break will look different to a hitter when they come from different release points.

One of the keys to a great four-seam fastball is maximizing its vertical break for your release height. We’d expect that fastballs with a higher velocity and more vertical movement would lead to a higher rate of swings and misses.

At Driveline, we have been fortunate to collect an extensive database of grip options, classified by pitch type, to help us identify potential adjustments and find the grip that “feels right” to our athletes. While the ideal grip varies from athlete to athlete, it is often the case that pitchers are generally unaware of the various grip options available to them. Making them frequently rely on grips taught to them at a young age.

You should choose a grip that feels the most comfortable and allows you to throw the ball as hard as possible. Staying healthy, locating well, and throwing hard are the keys to a successful fastball!

First, we’ll review some of the minor variations that pitchers use when they throw a four-seam fastball.

Generally, the only differences we see with the pitch is whether the thumb is tucked or flat, along with the placement of the index and middle fingers on the ball.

We recommend, that athletes start with the standard grip on the left and adjust based on their comfort, ability to command the pitch, and movement profile.

FF2 – fingers closer together or even pressed together

FF3 – fingers widen on the seams

With the “close grip,” the index and middle fingers are placed side by side and directly on the center of the ball.

Conversely, a wide grip has the index and middle fingers placed at positions stretched across the top of the baseball more widely than in our standard FF 1 grip.

Changing the Movement of a Four-Seam Fastball

Often, an athlete will have a comfortable grip but need some cueing to modify the pitch profile to their liking.

For four-seam fastballs, there are typically two clear options.

The first is to try and up the efficiency of the pitch to increase the pitch’s vertical break.

The second would be to lean into some cut and create a relative cut profile.

Cueing involves trial and error to figure out what works best for the athlete.

Many athletes will cut their fastballs to some degree. Leading the coach and player to determine the best path forward.

Here’s a list of cues that may be helpful in teaching or throwing a four-seam fastball yourself.

Think “Thumbs down to Catcher”

Use a wider 4 seam fastball grip

It’s important to note that changing efficiency in a game setting is much different than doing it in practice. It’s pretty simple when your only goal is to up the efficiency on a Rapsodo. You’re not necessarily worried about the batter, counts or location as much as you would in-game.

As pitchers get closer to the season, coaches should ensure that any potential movement profile changes are stress tested in live at-bats or exhibition games. This gives the athletes some ability to experiment without it necessarily hurting results.

For pitchers that can’t get the efficiency up enough with a 4 seam fastball grip change, nor can they get it into like a true cutter profile. Giving them a sinker is a good bet. Having the coaching experience to know when it’s time to commit to this is vital.

Check out our other blogs on the Slider, Curveball and Changeup.