This blog will spotlight the pitchers who have made it to The Show, specifically summarizing makeup (age, height, weight, nationality) and their route to pro ball (college, high school, international) in order to give more recent context to what type of players are debuting, where they are from, and how they got there.

Player age is an important variable in the process of projecting and assessing the true value of a prospect. The importance of age in player development is due to an existing aging curve, which explains that you can expect a player’s performance to decline over time as they age due to a variety of factors.

The Hardball Times aging curve analysis from 2005-2019 shows that once a pitcher reaches their mid-to-late 20’s they will see a significant decline in performance over time, mostly as a result of declining fastball velocity (pretending Jacob DeGrom doesn’t exist). Our updated research from 2010-2021 supports similar theories when investigating velocity and both strikeout and walk percentages.

On average, pitchers saw a bump in velocity on their heater from around age 22 to 26 years of age. At ~27 years old, fastball velocity is expected to decline. It is important to note survivorship bias, which explains that we can only account for the older players that stayed in the big leagues, and can’t account for players who were released or retired in the sample.

Looking at how age affects command, we see that players tend to have their best walk rates between ages 22 and 30. After age 30, walk rates start to climb.

Lastly, due to both declining velocity and command, players 30 and older punch out hitters at a below league average level. Ages 20 to 25 show increasing, above average strikeout percentages. However, punchouts start to decline after age 25, until they reach below average at age 30.

In baseball, age is yet another statistic that gives context to the performance and valuation of a prospect or MLB player.

If a player is succeeding at a level where he is younger than the competition, you can be bullish on the value of his performance. On the other hand, it is less impressive for a prospect to be succeeding when he is significantly older than the competition. In this case, his statistics need to be taken with a grain of salt, or you could give him a promotion to see how he performs against his true peers and age level. There are extenuating circumstances though, such as a player being new to pitching even at a later age.

In the density plot below, we can see the age distribution for all pitchers who made their debut from 2015-2020. The average age of all players is 24.8 years old, the youngest were 19-20 years old, while the oldest to debut were 33-34 years old. All five of the oldest players to debut had playing experience in the Nippon Professional Baseball league in Japan. 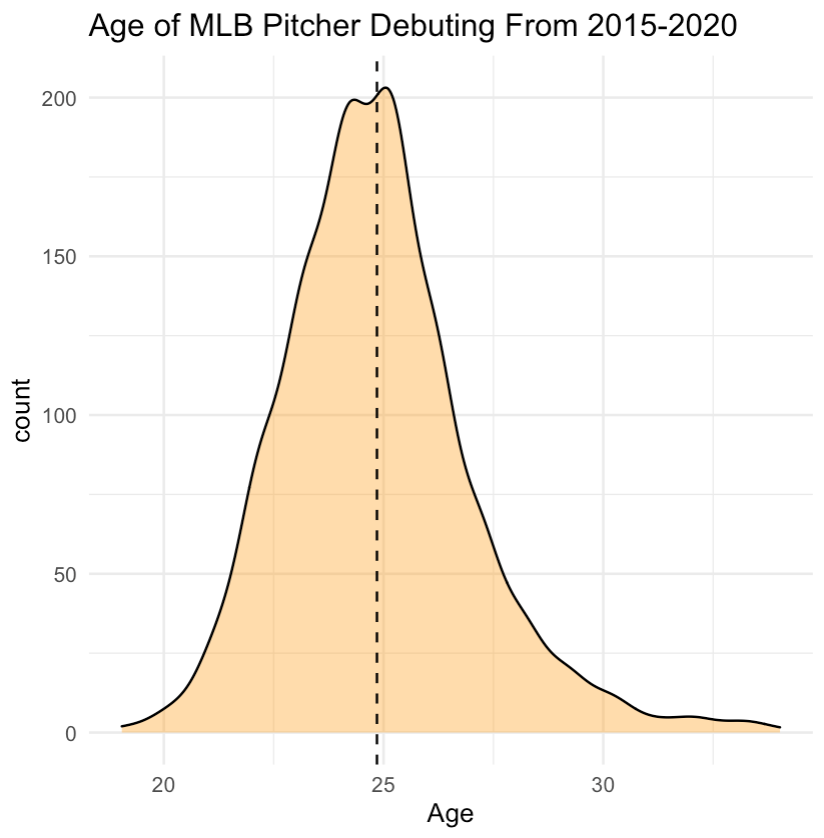 Why Does This Matter?

Understanding the context behind age and its natural effects on performance can help players (development) and coaches/coordinators (evaluating, development, scouting) for a few reasons:

Getting to the big leagues is hard, while getting there and sticking is even harder. Pitchers are likely getting better at fending off aging effects with advanced training methods, but continuous declining performance still exists and can derail careers if not accounted for.

How Can We Help?

Driveline has the tools to not only help you maximize your potential, but also help you sustain that potential for as long as possible.

The “eye test” exists for a reason, and that’s because athletes at the highest level of their sport are usually physically imposing figures. The average pitcher in this sample was 6 feet 2.5 inches tall and weighed 213 pounds, while 70% of the pitchers weighed over 200 pounds. If you are an athlete struggling to put big numbers on the radar gun and weigh 170 pounds, increasing strength and body weight is a good place to start. 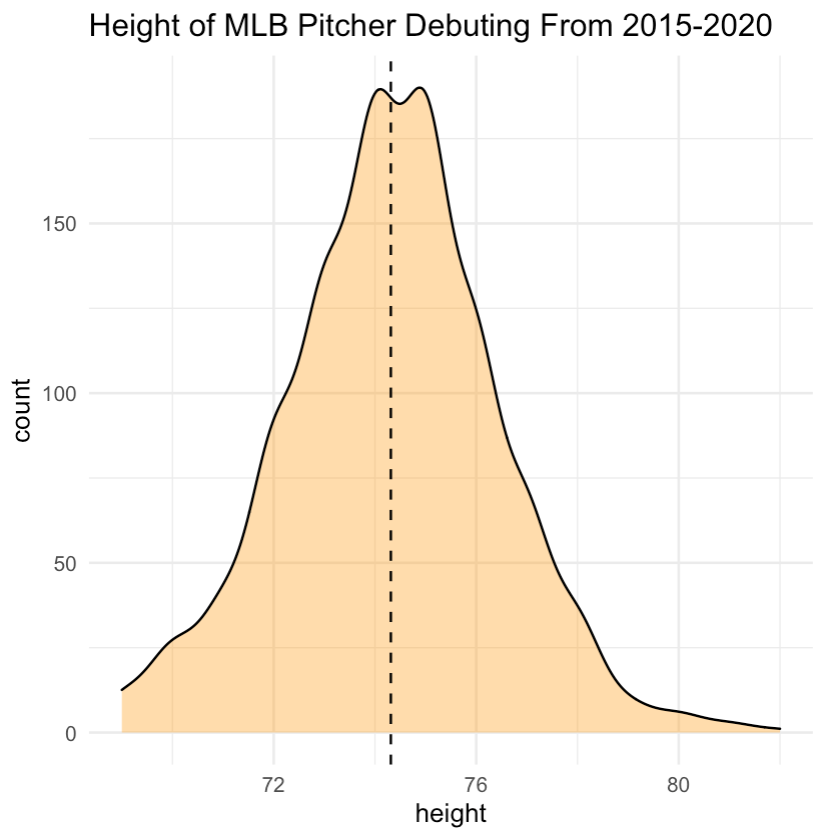 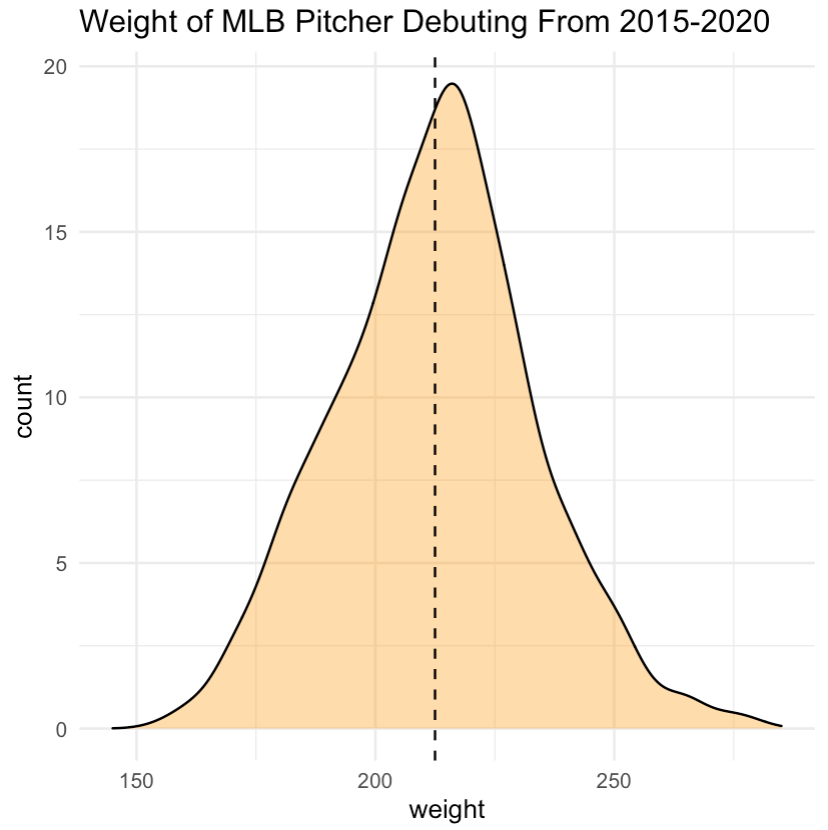 For players trying to reach the big leagues, there are so many factors out of your control. However, it is widely understood that body weight, strength, and power are controllable factors that play a significant role in a pitcher’s ability to throw hard.

For a long time, it was frowned upon for a pitcher to lift heavy in the gym because it was thought to affect mobility and increase injuries, or a variety of other debunked things. Now, pitchers are spending more time in the weightroom in both the off-season and in-season, lifting heavier, and as a result, getting heavier. Between 1990 and 2010, the average weight of an MLB player increased by 20.9 pounds from 188lbs to 209lbs.

Major League Baseball is a diverse sport of players from many countries, and their impact on the culture of the game can be seen now more than ever. On active opening day rosters this season, there were 256 international players, representing 20 different countries. The US (72%), Dominican Republic (10%), and Venezuela (7%) were the top three countries supplying big league talent on opening day in 2021.

These trends were almost identical for pitchers debuting from 2015-2020. The United States represented 76% of players, Dominican Republic showed 11%, and Venezuela was in third with 7%. The rest of the world combined to make up the final 6%.

American Pitchers Broken Down by State

Digging deeper, we can break down the American players, both college and high school signees, by state. Unsurprisingly, California, Texas, and Florida were the top three states producing the most players, as they’re bigger in size and are commonly regarded as ametaur baseball hotbeds. Wyoming, Vermont, and Maine were without a single player during this five year span.The southeast and northeast regions had the highest populations of players when accounting for player-per-square mile.

The majority broke into pro-ball via college, making up over half of the players at 59%. Louisville, Florida, Cal-State Fullerton, Kentucky, and Vanderbilt had the most debuts during this five year span. International signs accounted for nearly a quarter of the pitchers at 24%. Lastly, 17% of the players came straight from high school, with California, Florida, and Texas supplying the most of those prospects.

There are plenty of paths for amateur players to reach professional baseball and chase their dreams of making it to the big leagues. This piece aimed to give a more recent update on the people toeing the rubber in the show for the first time—who they are, and how they got there.