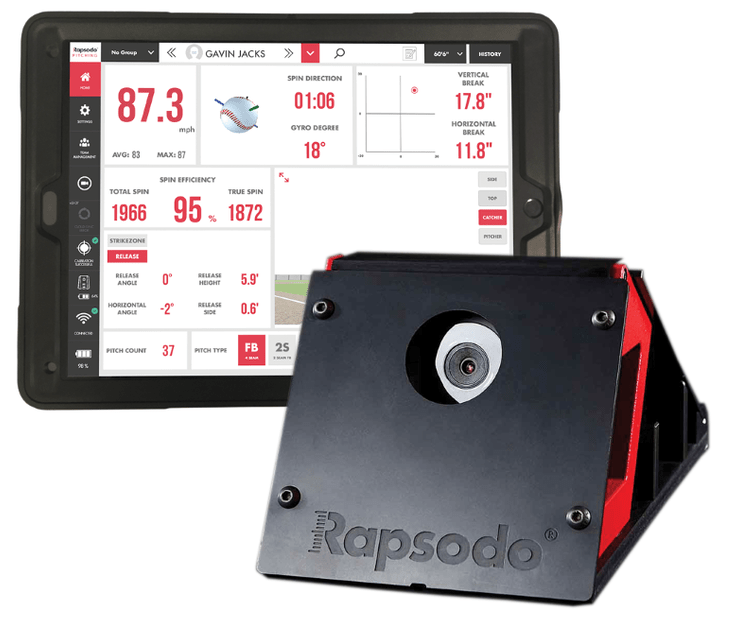 As player development in baseball continues to rapidly evolve, the demand from coaches and facility owners to integrate sophisticated, reliable, and affordable technology into their players’ training plans has never been higher.

In recent years, many products have entered the marketplace attempting to capitalize on this new-found demand for data-driven programming, but few have been able to find an adequate balance between affordability and practicality.

Enter Rapsodo, which released its original optical-based pitch tracking system in 2016 and subsequently put reliable ball-flight metrics into the hands of coaches and players at a price within budget.

Combining a quality product with 3rd party validation, great customer service, and exceptional technical support, Rapsodo burst onto the scene throughout all levels of baseball and became a staple within the industry, popularizing the pitch design movement into what it is today.

However, despite the large sum of value that Rapsodo’s original unit has provided coaches and players over the past three years, Rapsodo 1.0 still possessed a few shortcomings that left users wanting more.

For example, the original Rapsodo unit had to be set up on a tripod roughly 6 ft behind home plate to accurately measure ball-flight information. This created issues when someone on the mound was wild or when space behind home was limited.

The original unit also had a relatively long processing time between pitches and a small window to capture incoming pitches. If the unit was not given enough time to process the previous pitch, the new pitch would not register. Subsequently, if a pitch was thrown a foot or more outside the strike zone, the unit would miss a pitch or provide only a velocity reading.

Because Rapsodo calculated pitch trajectory using images of a pitch’s spin rate and axis as it was released from the hand, rather than via the flight path of the ball itself (like Trackman and PITCHf/x), Rapsodo lacked the necessary information to calculate a 9 parameter fit of each pitch’s trajectory. Without these specific measurements, coaches and analysts were unable to perform several relevant analyses—such as generating tunneling metrics, comparing release point parameters, or incorporating release and approach angles—into their pitch design sessions. The Improvements With Rapsodo 2.0

To address and overcome some of the limitations with the original unit, Rapsodo designed and released the 2.0 unit (MSRP $4,000) prior to the start of Spring Training in 2019.

Rapsodo 2.0 now contains a more durable casing with a versatile setup location on the ground, positioned 15.5 ft in front of home plate. With a sturdier body and more convenient setup, pitchers no longer have to worry about hitting the unit directly with a pitch and causing damage, and facilities can finally use Rapsodo 2.0 in live or confined settings with no limitations.

To address the sizable collection of misreads and missed pitches, Rapsodo 2.0 also incorporates a faster processing time in between pitches and a larger window to read pitches headed well outside the strike zone. Indeed, as shown in the bar graph above, these changes are a net positive for Rapsodo 2.0 users, as several validation tests show that Rapsodo 2.0 is able to read roughly 79% of all pitches thrown in a given session, whereas the original unit can typically only read about 62%.

Rapsodo 2.0 also provides coaches and athletes with more data points for analysis. For all users, release height, release side, and release angle are now provided on the user interface, while vertical and horizontal break have been adjusted to accommodate the ability of the new unit to pick up the baseball closer to release point on its flight path. At face value, the new features included with Rapsodo’s 2.0 unit provide users a large step up from the original model. However, with a new setup location, pitch-movement algorithm, and a suite of additional release-point metrics, it was clear that Rapsodo 2.0 needed to be validated before it could be fully endorsed over the dependable, original model.

Our Rapsodo 2.0 beta unit arrived in late January, and we immediately began pairing pitches between our new and original units to measure any discrepancies between the two systems. Unfortunately, despite high expectations, Rapsodo 2.0’s first validation test did not go as planned.

While velocity seemed to be within a reasonable margin of error between both units, estimates of spin- and trajectory-based movement were off by roughly 3-5 inches per pitch. Further, raw spin, spin efficiency, and plate-location errors were all outside of our comfort zone as well.

We continued to test and provide feedback to Rapsodo, who were willing to exchange our beta unit for a regular model and develop regular software updates to reduce errors. By the end of March, discrepancies between spin-based movement (again, the new default movement metric provided by Rapsodo) and legacy movement (Rapsodo 1.0’s movement values) decreased by 1-inch per pitch, and errors related to raw spin, spin efficiency, and plate locations were nearly halved.

While these improvements in the accuracy of Rapsodo 2.0 meant that most metrics provided by the unit were up to standard, there were still two major concerns with the unit that we felt needed to be addressed before we could consider the unit an upgrade from 1.0.

Namely, Spin-Based V-Brk was consistently inflated on FBs by roughly 2-inches per pitch, and pitches thrown from a low arm slot could not be read and measured by the unit.

Since one of these issues was a software error (inflated V-Brk errors) while the other was a hardware issue (not picking up side-arm release points), Rapsodo worked with our R&D department and training floor throughout the spring to test a variety of different setups, software updates, and hardware accessories to solve both issues.

By the end of May, Rapsodo’s team of engineers had developed a lift kit with a string of software updates that increased 2.0’s tracking ability of side-arm pitchers and eradicated the inflation bias of V-Brk on FBs. With demonstrated reliability over the past month of testing, we are now pleased to report that the unit is as reliable as the base model when using it in conjunction with the lift kit and up-to-date software. While using the lift kit may add an extra step during the calibration process, we believe that it is a must-have for coaches and players to ensure Rapsodo 2.0 is working up to its full capacity. Lift kits (shown below) are now included with every Rapsodo 2.0 unit sold from this point forward at no additional cost to the user.

The progress made by Rapsodo over the past four months has been impressive, and we believe that Rapsodo 2.0 is now a sizeable upgrade over the original model. That said, there are still items that need to be further tested to make sure users are getting the most out of this new version.

Namely, the 9-Parameter Fit estimates and subsequent trajectory-based movement metrics available to “Pro Level” subscribers are still susceptible to occasional misreads. While this is of no concern to non-MLB and minor league affiliate users, we do recommend that all users be cognizant of outliers when looking at Rapsodo’s new release point metrics during pitch design sessions for this very reason.

Further, a development in our most recent validation tests has indicated that vertical-plate location discrepancies now hover around 7-8 inches per pitch between Rapsodo 1.0 and Rapsodo 2.0. While this is perhaps somewhat unsurprising given the nature of how both units respectively reverse engineer ball flight, we felt it was important to note for users moving forward.

At Driveline, we invest a lot of resources validating 3rd party technology to ensure our coaches and players receive accurate feedback to improve performance. Often, this work can be frustrating given the black box nature and lack of customer support which many tech companies within baseball usually operate under.

However, as was the case in 2016, Rapsodo is the exception to industry standard. They were willing to work and communicate with us every step of the way to improve their product on a weekly basis.

Not only does Rapsodo’s refreshing approach speak volumes to where the unit is today compared to when it was released, it also provides us with an optimistic outlook for the functionality and validity of the system moving forward.

We’re excited for the future of Rapsodo 2.0, but most importantly, we’re now confident in the value it can provide today’s coaches and athletes as well.

Check out the Rapsodo 2.0 here