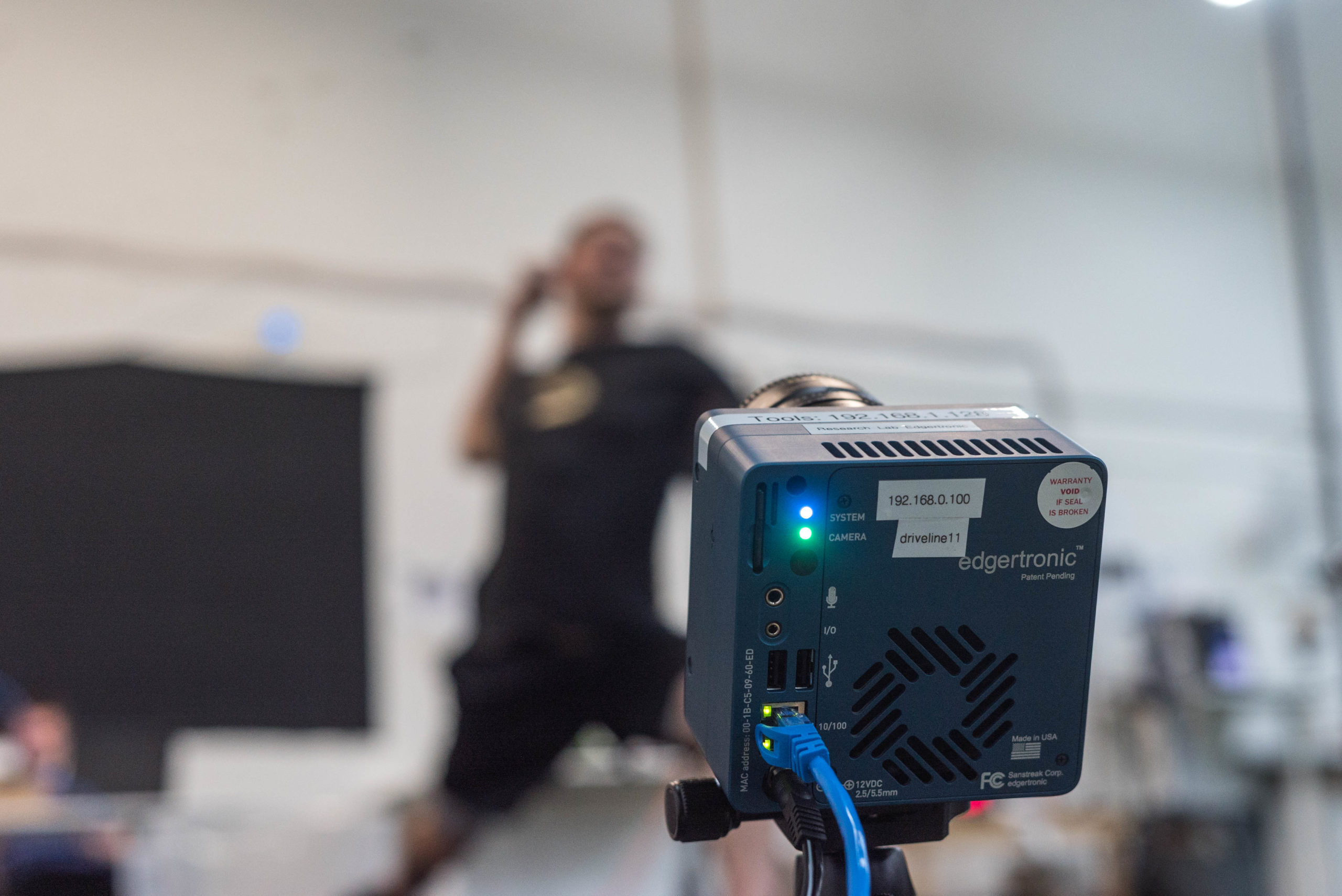 What We Currently Know About the Lower Half

There are studies which have linked lower half force production to ball velocity, and other studies which show very little correlation between the two.

Studies like this were what initially inspired our research, and so we conducted our own study to find out what was really up. Using two synced uni-axial (one direction) force plates, we had our athletes perform a rocker throw, and were unable to find any meaningful correlation between force production and ball velocity.

What the studies above, as well as our own findings, confirmed was that the direction of the applied force is important.

The study quoted above found that wrist velocities were highly correlated with the “maximal posterior push-off shear force.” In layman’s terms, the force directed forward had the greatest correlation to wrist velocity. Our study failed to account for the direction of the force, which may be why we found less than favorable results.

Next Step of Experimentation

That brings us to today. Last December, an anonymous MLB team invited us to their facility to use their Kistler Force Plate. We jumped at the opportunity. If you don’t know, Kistler Force Plates can measure force production in 3 directions (x, y, and z) giving us an opportunity to expand upon research we have done in-house.

This gave us an opportunity  to revisit our previous work, this time with a more advanced tool that enabled us to see the direction of force the athlete’s were creating. The set-up of the Kistler Force Plate. The plate was moved in front of the mat when front-leg testing was performed.

We selected 14 athletes, ranging from the college level to MLB, and had them perform various exercises on the plate. Each athlete performed a rocker throw using a 5oz Plyo Ball ® with the force plate under the front and back legs, as well as a vertical jump and a broad jump. We also had our athletes perform a mock-rocker throw using a towel (yes, we did the “towel drill”). Exciting stuff. Athletes were given adequate time to warm up in preparation to throw.

As always, the data we collected is open-source, which can be found here. The maximum force in each direction was extracted from the CSVs generated by the Kistler software, along with the measured weight of the athlete. Velocities of the throws were also recorded.

The velocity of each throw was compared to the peak force production in each direction. Weight was also factored into the analysis by dividing the peak force by the measured weight of the athlete.

Right off the bat, we notice a much stronger correlation between peak force production and ball velocity than we had in our previous study.

The largest correlation we found was between Fx and ball velocity, particularly when accounting for the weight of the athlete, with an r^2 = 0.267. The more force the athlete generates towards the target, the harder the throw will be. Well, it isn’t quite that simple, as there are numerous other factors that go into throwing (mechanics, rotational power, strength, etc.) but it is a significant correlation.

Also noteworthy is the fact that accounting for athlete weight led to a significantly higher correlation coefficient.

It stands to reason that a more massive athlete will naturally generate more force in the plate, but just because the raw force he generates may be very large, he may not be proportionally accelerating himself as effectively as a lighter athlete.

The strongest correlation in the front leg were between ball velocity and peak force in the X direction with an rˆ2 = 0.378, which supports our theory of a good front leg block contributing to velocity.

Simply put, being able to quickly and effectively stop your forward momentum will enable you to throw harder. Once again, taking athlete weight into account led to a significant increase in the coefficient of determination.

Time for a quick physics lesson.

Impact force, for example when a ball is thrown at a wall or an athlete blocks with his front leg, is found by calculating the change in momentum divided by the total time of impact: F=Δp/Δt. The faster you are able to stop your forward momentum, the more force is generated. The faster you stop yourself, the more force you create, and the harder you can throw.

As discussed in our previous article, results in both the rear and front leg support the idea that the direction of force matters. The ball is being thrown forwards, so it stands to reason that force generated in that same direction will contribute more directly to ball velocity.

In both cases, correlations between velocity and Fy were all fairly minimal. Due to the fact that the Y-direction is perpendicular to home plate, force generated in this direction in theory would not have a large effect on throwing the ball. There is some twisting and turning in both legs as the throwing motion is a largely rotational movement, but we did not find a meaningful relationship between these lateral forces and ball velocity.

As for Fz, although there is minor correlation in the front leg, there is no major correlation to ball velocity. However, all throws were made on flat ground. Throwing down the slope of a mound does have a vertical component, and perhaps when throwing off the mound we might see a stronger relationship between vertical force production and ball velocity. In the past, we have written about studies relating vertical jumps to pitching velocity, as well as conducted our own research on the topic. While our research yielded less than favorable results (r^2 = 0.014), other studies have found statistically significant correlations that warranted more investigation.

We recreated our previous study using the Kistler Force Plate, performing both the broad jump and vertical jump, which were compared to the maximum recorded mound velocities we have for our athletes.

Note: Athletes #9 and #14 each had one vertical jump file corrupted, so they only have data of one jump.

For both jumps we found virtually no correlation between force production and how hard any of the athletes have thrown off the mound, including when we account for the weight of the athlete.

Although our athletes have a reasonably wide skill gap (college to MLB), and all of our athletes throw fairly hard (87mph+). As shown by Baseball Athletic Test: A Baseball-Specific Test Battery, average broad and vertical jumps increased when comparing high school, NAIA, and DI college athletes.

Additionally, our sample size of the collegiate athletes (n=3) was small in comparison to pros (n=11). Considering the small sample size and fairly high skill level of our athletes, it would not be unreasonable to see a correlation appear given a group of athletes with a wider range of skill level and higher sample size.

That being said, we have yet to see a definitive correlation between jump power and pitch velocity in our research.

It’s the moment you’ve all been waiting for: the official Driveline Baseball force plate analysis of the towel drill. Dun Dun DUN

Note: one of our athletes opted-out of performing the towel drill, so his data has been omitted. The images below are the graphs generated in Bioware, the software used to collect data from the force plate. By looking at the graphs, try to guess which column, left or right, was the towel drill and which was the actual throw.

Graphs of force production by the front leg of 4 athletes

Graphs of force production by the rear leg of 4 athletes

Pretty difficult to tell the difference? Answer: the left side is the actual throw, while the right side is the towel drill. Interestingly enough, for both front and rear legs, the graphs comparing the actual throw to the towel drill look pretty similar. The magnitudes of the forces vary slightly, but overall it is tough to find any noticeable differences between the graphs.

In a practical sense, this could imply that exercises involving similar movement patterns could have a strong carryover to improving the lower half. For example, a med-ball overhead throw could promote better front leg blocking. Knowing that similar exercises use the lower half in similar ways gives us a huge insight into how to specifically train our athletes to throw.

I have opted to not include the large and rather ugly data sheet comparing the two drills, but the data can be seen in our attached open source datasheet which was posted above (or here). From the data, force production in the towel drill was, for the most part, significantly lower than the throw. A few outliers aside, it is safe to say that athlete’s intent was significantly lower when performing the towel drill as opposed to the rocker throw, both anecdotally and from the data.

The primary issue with the using the towel drill as a training exercise is that there is no way to gauge intent. There is no weight (like with med-balls) and there is no measured velocity to give any kind of tactile feedback when performing the exercise.

Here at Driveline Baseball, we are used to failure. Countless hours have gone into research projects that ended up going absolutely nowhere. Naturally, we get pretty pumped when something actually works out and gives us meaningful information.

A correlation coefficient of r = 0.615 for Fx/Weight (and r^2 = 0.378) in the front leg, is definitely significant, and supports the idea of a strong block. In the rear leg, a correlation coefficient of r = 0.517 (and r^2 = 0.267) for Fx supports the idea that a good linear drive towards the home plate will increase velocity as well. Both of these numbers are huge in comparison to what we are used to finding, which is an exciting discovery.

The data is not perfect, we had a relatively small sample size, and the throws our athletes performed was not a full windup pitch. And yet the data still gives an insight into how the lower half works in throwing.

We thank the Redacted Redacteds for granting us access to their facilities, and providing us with the resources to conduct this little experiment. We look forward to any work we may do together in the future.