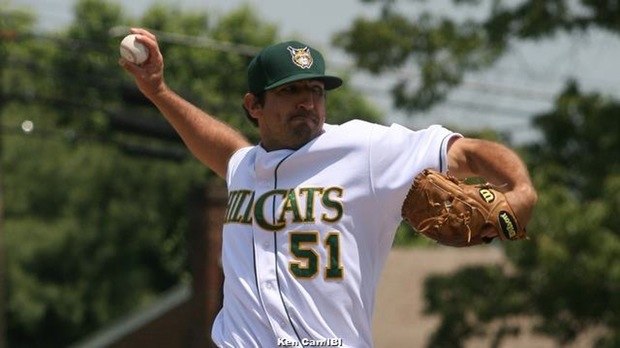 The Bump in the Road

When we wrote, previously, about Casey Weathers, his troubles after Tommy John recovery and his return to baseball after two elbow surgeries, the piece ended on a hopeful, positive note – a free agent signing with the Rays after two months of intense work.

It didn’t go as planned.  He was cut almost immediately – the command wasn’t there.  The results weren’t there.  But there was something there for Casey: the desire to compete.  The same ambition and drive that had led him into his first comeback attempt with the Giants.

“The idea was – when I went to camp with the Giants, I didn’t have my velo, my elbow was still bothering me, and when I got released, no one was calling me, my agent was telling me it would be really difficult to get back into baseball, and I just felt, for myself, I hadn’t pitched to my capabilities at all.  I didn’t want to go out like that.  It wasn’t me.  The me who throws 90, 91, that wasn’t me at all.  I had to keep playing.”

After being cut by the Rays – a significant setback, more than a bump in the road, even – that attitude remained.

“I don’t want to be the guy sitting in my cubicle when I’m 40 telling everybody, ‘yeah, I used to play minor league ball, but injuries derailed my career.’  I’m not going to do that.  That’s just an excuse.

I’d rather be healthy and just fail.  That’s much more of a worthy task for me.

I had all these excuses hanging over my career, like injuries – and it just didn’t work out?  No.  You make it work out, and you find out what you’re made of.  I hadn’t answered any questions about myself.  All I had done was become a really good rehabber.  I didn’t even know what my capabilities were, aside from the ghost of this 23-year-old guy pitching in AA in 2008, because that’s the last time I’d been successful.”

Casey’s professional career is highlighted by a 40-month stretch where he was essentially rehabbing his elbow continuously.  Even when he was playing, he was pitching through arm pain.  Playing for several organizations – all of them dreaming on the first round pick with the big, high-velocity arm- and all the while, his elbow was on fire.

“The problem is, at least for me, [is the attitude of] ‘hey, you’re healthy, you can go pitch, go be better.’ And, yes, I could pitch in a game, on adrenaline, for one inning, but it’s the next day.  It’s when I don’t have adrenaline, and I’m trying to get my work in, and my elbow’s not allowing me get the work in that’s necessary.  And this is since my first elbow surgery, there was this sense that, ‘well, your velocity’s there, so you’re fine.”

But for me, I have things I need to work on, I have things I need to get better at – I just grit it out, and then get thrown into game situations and expect to be able to compete, when I’ve never showed myself that I can do this in my workouts or my routine.  You’re kind of just flying out there, and you don’t have a way to fix it, because you can’t work on it the next day because your elbow’s hurting.”

Casey’s second comeback attempt began on this note: “I have one shot, and I want to throw 100 mph.”  He was 93-95 mph with the Rays and again the command was an issue.  The silver lining from his time with the Rays, though, was arm health.  For the first time, Casey was pitching without pain.

“For me, a healthy arm was when I finally got up to Driveline, and not only was I healthy enough to go through everything, I was healthy enough to go through the process that Kyle asks of his clients – it’s a labor-intensive PlyoCare routine that he asks you to do.  And that’s great, but I need to be able to do that at full intensity every single day.  That’s what a healthy arm means to me.

Once I was able to handle the workload, get better in my day-to-day process, and then the next day be able to do the exact same thing again, free of pain – that was a huge thing for me this year.  My routine didn’t change once due to complications in my arm.  I was able to get everything I needed out of my throwing program.  If I had three or four days off I could throw a light side – my arm could handle what I think the game necessitates from you from a work and a process standpoint.”

Are you an athlete who wants to upgrade their baseball velocity and strength program? You can use the same programs that Casey used. We outline them in our Hacking the Kinetic Chain MegaKit.

A healthy arm underlies everything.  From the day he walked in the door last March, Casey’s program was designed exclusively around resolving his arm pain combined with very high training volumes.  He was in the gym, 4-6 hours a day, 6 days a week.  That’s what he committed himself to.

“For me, I can’t just grab my glove, roll out to the bullpen during the game and expect to pitch well.  I have to do the things that are going to even allow me to have a chance to compete.  That’s it.  That’s all I can ask for.

The game is so secondary to the routine and the process, and that’s what a healthy elbow got me.  It got me back to actually having a process, and then being able to trust that process.  And I do way more work now than I ever did.  I can handle so much more now, and it’s great.  I love it.”

It’s easy – perhaps too easy – to say that having a healthy arm is important.  An unhealthy arm is a vicious circle, because it usually leads to poor results, and the attempts to fix the results – mechanical adjustments, side work, drills, etc. – also rely on arm health to be effective.  Attempts to mitigate, work around, or ignore the fundamental, basic problem of an unhealthy arm do little to address the root of the issue – which makes it all the more problematic when performance flags again.

Casey signed with the Indians and had a successful, injury-free minor league season.  It was the result of a tremendous amount of hard work.  He came to the attention of the club after not throwing a single ball (3-, 4-, 5-, 6-, and 7-ounce balls) under 104 mph during a weighted ball training session.

That was November.  For Casey, throwing 105 mph did not automatically manifest itself in mound velocity. There were some specific learned movements that he had overcome in his throwing motion that reappeared in his pitching mechanics when he toed the rubber. Back on the mound, he reverted back to the too-linear, tall-and-fall guy he was when he got cut by the Giants. And Casey had an additional issue to juggle to be ready for Spring Training – something that had always been an issue for him: command.

By January, he was training command 3-4 times per week while also keeping up on PlyoCare throws, weighted ball training once a week, and lifting (around this time he pulled off a 525-lb deadlift–strength matters). And it was a difficult road. The cumulative effect of training 6 times per week was killing his performance.

“I was in Kyle’s ear a little bit about it – ‘why am I not throwing hard, what’s the deal?’  But at the same time, I was aware enough to know that it was more important for me when I first got to Spring Training  to prove that I could compete consistently.  To me, that means being able to throw strikes, not walking the house, trusting your stuff – all the clichés.  I think that mental hurdle was holding my velocity back, and I kind of knew that – and it was actually the Indians who pushed me out of my comfort zone a bit; they got a sense of me, and what they knew about me showing up there was ‘I don’t want to walk people.’ And they pulled me aside and said, ‘don’t worry about it.’

Their director of player development, Carter Hawkins, just told me – ‘we don’t care if you throw 30 straight balls, because that will give us a baseline of what you can do.  We care if you get better from there or not.’”

And the command was there.  In Spring Training with the Indians, Casey was figuratively pouring in the strikes.  He walked two batters all spring.

“The Indians said, ‘you’re holding back a bit.  We see it.  Just a tad.’  And then I said, “I think I’m gonna let it fly today.”  And I had an outing where I upped the intent, and from there on out I was able to show my body what it was like to throw with full intent, and my command was fine anyway, and once I bridged the two, I was fine.”

Casey spent most of the year in High-A and Double-A, posting a career low walk rate to go along with an average fastball velocity above 95 mph.

So what does it take to go from sitting 89 mph to sitting 95 mph in a year? In Casey’s case, it took a year of training to finally feel healthy enough to just trust that he could compete…and trust that he would feel good enough the day after to get the work done to improve.

On the training side, improving fastball velocity and pitching pain-free post-injury is a difficult mental journey. Casey specifically saw his pull-down velocity rise from the mid-90s to mid-100s, only to see his mound velocity not budge. It took an extra two months of training just to overcome the mental hurdles of “Will I throw strikes?” and “Will my arm hurt tomorrow?” in order to compete in Spring Training.

And then it’s back. Casey gets to just compete.

“I think this year answered a vital life question I had about myself, which was – can I do it?  Can I even get healthy enough to do it?  And it wasn’t the best season in the world, but it was healthy and competitive, and now I have a foundation for more work.  As far as the “never satisfied” attitude goes – yeah.  What’s the point of doing all that work if you’re not going to constantly try to get better at it?”

That’s just life in general – if something’s going badly, then someone has the answer and you have to do that. And that’s not always true.  A lot of things just don’t have an answer, and that’s the frustrating thing – people aren’t comfortable with that.

When we focused on arm health, when Casey could pitch pain-free, that’s when things started to go right.  Then and only then.  But – when do you stop building on that?

“So if I pull down 100, I should do that every time.  I should be working, I should be tweaking – I don’t necessarily believe in ceilings, there are only plateaus.  So if I plateau, there’s something I’m not doing from a recovery standpoint, maybe my weight is too low – there’s something I can be doing to do it every single time.  And then when I do it every single time, then I should be doing more.  It’s cyclical.  This offseason, I hope to improve my velocity, definitely.  I 100% can’t be as good as I was this year and expect to continue to play.  I have to be – I want to be – better.”

Recovering from Tommy John surgery? We have a free return-to-throwing program.

If you are a pitcher who has had a hard time coming back from arm surgery or pain, call us at 425-523-4030 or email us. We can put together a game plan for getting you back to competing.