The changeup is a deadly weapon at the major league level: Entire careers are made (Jamie Moyer) or destroyed (countless starters who couldn’t master one) as a result of the pitch. Change-ups are typically 10-15% slower than a pitcher’s best four-seam fastball he’ll use in a game and will have both arm-side run and sink to it. The result is a pitch that changes both speeds and locations while having a similar trajectory to a four-seam fastball. It’s best used to mitigate platoon advantage (and in some cases, completely neutralize it – see also Shaun Marcum’s three-year reverse splits) so starting pitchers can get opposite-handed batters out. Coaches rush to teach the changeup to youth pitchers because they believe it’s safer on the elbow and that it’s a great pitch to master early. It’s true that changeup kinetics are lower than breaking balls and fastballs in a typical pitching delivery, so the safety argument probably holds some water.

However, learning how to throw a changeup too early has three major problems:

Young baseball hitters – even ones in high school and even college – don’t have efficient hitting mechanics like most professional hitters do. How many times have you gone to a high school or Little League game and saw hitters completely swing through fastballs for strike three? This simply does not happen at the professional level. In 2010, the “whiff rate” (swing and miss) of the top 25 pitches were all breaking balls and off-speed pitches. The best whiff rate was Cole Hamels’ changeup at 48%, while the best fastball whiff rate was Takashi Saito’s at 37.4%. (source: Beyond the Box Score)

You might be wondering how using Hamels’ outstanding changeup is proof that the changeup has problems at the youth level. The reason is as I stated before: Hitters get good fastballs blown by them extremely often at the youth level. This is primarily due to the fact that most youth hitters have inefficient hitting mechanics and improper loading sequences that causes them to be late to most fastballs. Many young hitters have a severe case of “bat drag,” where the elbows lead the handle of the bat into the hitting zone, causing a very long, looping swing. 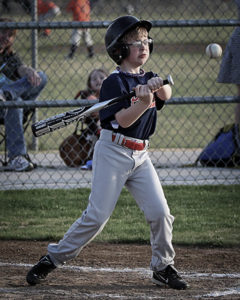 When you throw hitters like this a changeup, you are doing them a favor! You speed up their bat, allowing them to make solid contact. Pitchers in the big leagues throw off-speed pitches and breaking balls after they’ve set up their fastball command.

Scouts primarily want to see good fastball velocity and good fastball command at the amateur level – these two factors matter the most as you move up the levels in pro ball! Teaching changeup grips early can lead to problem number two…

Paul Nyman made this observation many years ago, and I agree with him wholeheartedly. Youth pitchers who rely on a changeup and throw it often in their bullpen sessions will often change their throwing mechanics to get better sink and velocity separation off their fastball. As a result, their pitching mechanics become highly linear and their arm speed decreases due to poor use of rotational force, and this loss of velocity creeps into all of their pitches, including their fastball.

Teaching the changeup early means trying to improve the changeup early. The drive to become “Hamels-esque” in 11U means that you could be missing out on what originally made Cole Hamels, the ability to throw a fastball 92-94 MPH.

This argument dovetails nicely with our motto at Driveline Baseball, which is that pitchers must throw often and not necessarily pitch often. The two skills have a lot of overlap, but as Paul said a long time ago, you can throw a ball without pitching it, but you can’t pitch a ball without throwing it. Pitchers must master solid throwing mechanics as they develop over the years, and by focusing too hard on things like throwing strikes and developing off-speed pitches, they will never develop the elite velocities they need to pitch against post-high school competition.

We detail how to teach youth pitchers good habits, good mechanics and good intent in Hacking the Kinetic Chain – Youth. Youth baseball is filled with a lot of gimmicks and manufactured fear–this buy-once, use-many-times guide lays out a solid, smart training plan for your son from 9U to 14U.

Improper Focus on Getting Hitters Out

Mastering a reverse breaking ball (which a changeup more or less is) is a great way to help yourself get opposite-side hitters out. There are two major problems with this at the youth level:

So if you’re a right-handed pitcher and you spend your time developing a pitch to get lefties out, you aren’t even focusing on what is most important to get the majority of hitters out that you’ll face in your high school career! Fastball velocity/command are the most important, followed up by breaking ball quality/command. Your off-speed pitch comes much, much later down the line.

Left-handed pitchers tend to focus too much on deception (varied arm angles, a possible injury indicator) or craftiness (throwing change-ups or other off-speed pitches) to get right-handed batters out, rather than simply developing two fastball variants (two-seam and four-seam) and the ability to locate hard fastballs to both sides of the plate and in three vertical locations – up, middle, and down. So, is the Changeup Bad?

No! Of course it isn’t. However, it’s not the end-all be-all of pitches that youth pitchers should learn to throw. Contrary to what most people will tell you, fastball velocity is still king, while fastball command is the prince. Colleges and pro organizations want to see big fastballs out of solid-bodied pitchers, and they want to know that you can command it to multiple locations to set up your other pitches. Remember, the better your fastball is, the better your other pitches become automatically!

A good training program will take all of these factors into consideration and develop a comprehensive pitching (and throwing) program for progressing athletes regardless of their level of competition.