The idea of lifting for a high school athlete is usually an afterthought, even though it is often one of the most crucial parts of their development. Emmett Weichbrodt saw the benefits of starting a structured development plan early, hitting six days a week and lifting 3 days a week at Driveline.

Weichbrodt came to the gym in late November, showing above-average strength and power for the high school level in his initial strength assessment. Starting in an already impressive place for a high schooler, now after his most recent assessment, he’s going into his sophomore baseball season with the metrics that match an above average college baseball player based on in-gym averages.

We started him on a relatively high-volume strength program to build a foundation of work capacity and to attack the lowest hanging fruit for a young high school athlete. This gave him the stimulus needed to for gaining strength and lean mass. After building a solid foundation of strength and volume, we moved Emmett through two phases with reduced volume, progressing from strength to power focus.

Before we get into the specific numbers, the graphs you will see below have white and red lines. The white lines represent in-gym averages for each metric. The red lines are one standard deviation above and below the mean. For comparison purposes, we are putting this athlete into the college athlete category so the norms shown are for in-gym college athletes.

Lift consistently and eat in a caloric surplus is simple and yet it’s incredibly effective.

We watched Emmett go from weighing 174.6 on November 25th to weighing 192.5 during his last retest on April 7 before he started his season. That 18-pound increase is a reflection of this athlete’s dedication and commitment to his craft. 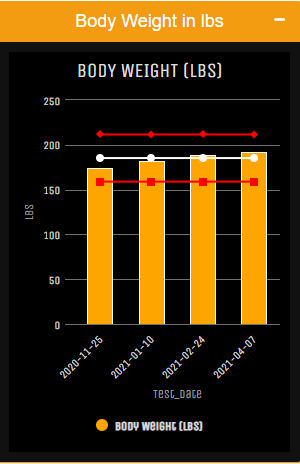 We measure athletes’ absolute strength using an Isometric Mid-thigh Pull on force plates which allows us to see how much force the athlete is capable of putting into the ground. Weichbrodt pulled 2698 N in his initial assessment, which is slightly above the high school average at 2614.8 N.

In late February, Emmett pulled 3624 N—which is not only above average for what we see in our college athletes but also slightly above the average we see from our minor league athletes at 3434.8 N. During his latest retest, we saw a slight drop in his absolute strength, which is not ideal but can be somewhat expected after a power-focused block of training.

The next portion of the strength assessment we use our countermovement jump (CMJ) and squat jump (SJ) to measure lower body power. The graphs below show Emmett’s results and how they compare to the college athletes we’ve tested in the gym.

In-gym averages for college athletes performing the CMJ and SJ are 41.2 cm and 36.7 respectively. Emmett’s CMJ went from 33.5 cm in late November to early 42.3 cm in early April. His SJ went from 31.8 cm in November to 36.8 cm in April. We also saw a corresponding significant increase in his peak power for both jump types.

The last test in our assessment is the repetitive hop test (RHS) which gives us athletes their respective reactive strength index (RSI) which approximates elasticity and stiffness by dividing the flight time of the jumps by their ground contact time. The in-gym college average for our RSI test is 2.5. When Emmett first got to Driveline his initial RSI test he scored a 2.2, which has since increased to 2.9

The importance of strength and power

The graph below gives perspective to the importance of strength and power in generating bat speed and velocity. The graph represents IMTP net peak force and SJ peak power. Emmett started in the bottom left quadrant of the graph (low force and low power). Ideally, we would like him to progress to the top right quadrant (high force and high power), where the average bat speed is 73.1 for in gym college athletes.

Right now, Emmett is sitting in the top left quadrant (high force, low power) and the average bat speed is 68.6. Emmett’s name is above the dots on the graph and gives you an idea of how close he is to the top right quadrant. Remember, this is a sophomore in high school being compared to college athletes. In most cases, the stronger and more powerful athletes get the faster their bat speed gets.

Each of the dots on the graph represents an athlete and where they fall on the bell curves of strength and power. As we go from bottom left to top right, we generally see the dots turn from blue to red. The blue dots represent athletes that have below seventy miles per hour (MPH) bat speed and the red dots represent athletes that have seventy-five MPH and up on bat speed. As you can see, Emmett has seen steady improvements in strength and power since he first got here, and is climbing up into the top right quadrant of this graph.

For more information about our driveline high performance assessment, check out this blog and subsequent blogs going in-depth about all the tests, how they are performed, and why we use these tests to assess athletes.

Developing as a hitter

When we look at the hitting side of things, Emmett’s hard work in the weight room paid huge dividends towards his development as a hitter.

Below is a rolling graph of Emmett’s average bat speed during his six months at Driveline – November to April. The solid middle line is his rolling average, and the dotted lines above and below are the standard deviation bounds. What we see here is a pretty steady increase the entire time—ideal…to say the least!

His dedication to the weight room and his consistency in the cages paved the way for Emmett to make some huge gains.

With the strength and hitting improvements he made at Driveline, we are very excited to follow along with Emmett as he tears it up during his spring and summer seasons!

Interested in training with us? In-gym and remote options are both available