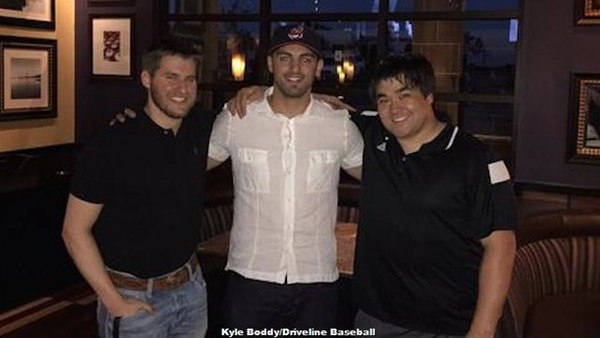 In the 2015 MLB Draft, Christian Meister was drafted in the 29th round out of “No School.” He was signed because he showcased good velocity with command despite graduating from a junior college and not having a team to play for during the 2015 season.

During his pitching training at Driveline, Meister increased his mound velocity from 87 mph to 92-93 mph, hitting 95 mph, and improved his command of all pitches.  Meister’s story provides insight into building a foundation for elite pitching velocity and command, starting with the most important tool of all: learning how to work.

Getting Started: An Uninspired Approach

When he started with us at Driveline, he’d just seen his aspirations of playing college baseball go up in smoke.  He wanted to play in the majors, and the standard path – junior college to college program to drafted – was seemingly closed to him.

Meister recounts his first experience with Driveline, after being introduced to us through his friend and teammate.

“I was interested.  I’d heard about weighted ball programs in the past, and I’m always looking to get better.  I really liked what they were about, and I trained there for a couple weeks without anything formal.  I decided to stick with it and go there full-time – I knew that where I was at wasn’t where I wanted to be.”

Still, even with that decision in mind, Christian’s training intensity was inconsistent and both trainers and athletes noticed a curious propensity to skip throwing recovery and high utilization rate of the Smith machine for lifting.

Learning to Work: How Mindset and Environment Impact Training Results

As the summer and fall turned to winter and Christian still was without a school to play for in 2015, he made the mental shift to fully commit to the program.

“For the first couple months, I was kind of blindly doing things, and then I started to see that if I was going to do it, I needed to do it 100% every day.  I saw other guys, how hard they were working – one of the guys that I worked with was Casey Weathers, who’s in AA for the Indians, and I worked with him for six months.  He’s an older guy, and he’s probably one of the hardest workers I’ve ever seen in my life.  Every day, in all aspects – weighted baseballs, lifting – he’s extremely strong and fit.  It’s cool to have a guy that can push you like that.  Like, I’m throwing 5 oz. baseballs as hard as he’s throwing 7 oz. baseballs.  It makes me want to get better.  That was a great training tool to have.”

Casey and Christian throwing weighted balls (Oct ’14). He barely scrapes 96 mph and it’s a good day. In February, he will have a day where no ball is under 96 mph and be upset about it.

Those trainees, and the environment they create, are essential.  For a significant time during Meister’s training with us, he did the workouts, but was not fully invested mentally.  It was a shift that the training staff noticed.

“He knew what to do, but he hadn’t committed his heart to executing it.

“Sometime during the fall, Ben Brewster [now with the White Sox organization], an intern with us at the time, took Meister aside and showed him how to lift – not just the mechanics of it, but the mentality, and the importance of following through on recovery.  Brewster held him accountable for his training – and that kind of accountability can be everything.”

“Our athletes are some of the best teachers we have. Who am I to say ‘show up five days a week?’  He’s employing me.  If you pay someone to yell at you, eventually you’ll see it’s ridiculous because you have the power to make them stop.  To me, it has to come from peer pressure.  That’s why we’re protective of who we have.”

It’s this culture that is the most important part of our facility.  Meister being around professional pitchers who would hold him accountable for his own training is what makes a good working environment.

Meister saw immediate gains from the training, but, inevitably, he hit a plateau.

“It’s different for everyone.  It depends on your mechanics, work ethic, natural ability.  I saw a pretty quick jump initially, [but] there are ups and downs, too.  The guys at Driveline, they’re very in tune with that.  They’ve seen it before.  No one goes straight up.  I think it speaks to baseball, really.  It’s a game of failure, and how you deal with that. It’s not about the week to week gains as much as it is the overall, ‘where I’m going to be in six months, a year.’”

The velocity charts for Meister tell this tale in remarkable clarity.  You can almost draw a line, in the fall, where he just decided ‘I’m going to do this’, where he legitimately taught himself how to work hard.  But without that commitment, there’s no way he gets drafted.

Once that mentality shift happened, Meister started facing a new challenge: the fact that training at that level means you’re rarely working with a full tank of gas.

“Plenty of times my arm wasn’t feeling good, but you have to go with as much effort as you can.  One of the terms we use – ‘if you’ve only got 80% today, give 100% of it.’  Making sure you’re always going as hard as you can, regardless of how much you’ve got that particular day.  It’s always going to be different.  You’re rarely at 100%.”

Want to find out how to take your pitching training to the next level? Our MaxVelo program can help identify what is holding you back. Or contact us and we can find a program that works best for you.

Sustaining High Output for the Long Run: Training as an Identity

And, expanding on that, Meister had a takeaway of his own from his experience at Driveline:

“What it means to put in damn near close to 100% every day for a long period of time.  Growing up a little bit.  It was huge.  Obviously physical development, but mental as well.  You’re not always going to have your best stuff, and how you deal with it, how you prepare, that’s huge.”

Preparation is an important word for us to highlight, here.  Both because it was the missing element before Meister committed to the program (he would often do workouts, but skip recovery) and because it was a huge mental edge to have once he did.

“When I know that I’ve prepared the best I can, there’s no doubt in my mind when I go out there.  When I step on that mound, I know that I didn’t leave anything to doubt.  There’s no regrets.  I think it’s a huge mental edge to have.  Then you just attack, and you can feel good at the end of the day regardless of the results, and if you’ve worked hard usually the results will be in your favor.”

Meister had his own take on his biggest lesson from his time at Driveline:

“The work ethic, learning how to work.  Dealing with how I’m feeling – how my arm’s feeling – on a day-to-day basis.  That’s the nice thing about being in the Indians organization.  They’re the most progressive as far as pitchers and throwing programs.  We’re allowed to long toss, we’re allowed to do whatever it is we need to do that makes us successful.   That’s key for me, because I came from Driveline, which is a unique program – most of the other organizations I wouldn’t be able to do that, to continue it.  That’s huge.”

Work ethic, in our minds, doesn’t simply equate to doing hard work.  It’s a phrase that’s hard to pin down, but, as evidenced by Meister’s development, it can sometimes just be as simple as showing up.  “If training is work to you, you shouldn’t do it,” says Boddy.  “So much of professional baseball is harder than that.  If the preparation isn’t your passion, then it’s not really your thing.  Work ethic is the ability to work at a menial job and then show up at Driveline with the correct attitude.”

What Lies Ahead: One Goal Down, One Very Far Away

While Christian has achieved one goal, he is still very far away from his primary one: pitching in the Major Leagues. While he has learned what it takes, that doesn’t mean that he will have what it takes. But continuous improvement can help him build upon this success.

The kind of preparation Meister talked about, the kind of intense, focused effort that can consume one’s day-to-day life, seemingly leaves little room for the big picture.  But, as Meister points out, having a long-term goal is essential.  And having that goal doesn’t have to be a distraction.

“Absolutely.  One of my philosophies of life is to have a long-term goal, a big goal, and then set a bunch of short-term goals and then check those off.  The ultimate goal is to make it to the big leagues and stay there.  Short term, continue to train, get better every single day.  It’s as simple as that.  If you take care of the little things, then the big thing is going to take care of itself.”

In the end, Meister’s passion for the game shone through – and it’s not a coincidence.

“You have to do so many things in life that you don’t like. If baseball is one of them, don’t do it.”