The operating principle behind the Driveline Academy is that the core concepts of player development are just as applicable to youth players as they are to older ones. Generally speaking, by focusing on long term skill development instead of simply being a slave to winning youth baseball games—with youth baseball players in youth baseball environments—we can help players get better sooner. In doing so, we have the opportunity to compound those gains—like interest—over time.

For some players that means accelerating their path toward developing the Skills That Scale for their next level of competition. Effectively, these players are working to get ahead of the curve. For other players it means acknowledging that while they may be behind the curve currently, by putting a few more of our chips on the player development side of the table, we can get them back onto a path of being effective and competitive, and then start to think about compounding those gains toward the next level.

In both cases, having an accurate picture of where players are relative to their peers is absolutely essential to the process.  By understanding player performance in a transparent and visible sense, and applying this understanding to a whole pool of players, we can better understand not only the players inside the pool at any given age, but also how those players compare to their peers both younger and older.

It should be specifically noted that the data in this analysis does not apply to all youth players—only the ones that we had in our Academy in our first year. We had ~100 athletes in our program in year one, we’ll nearly double that number in year two, and we will continue to execute processes like this over time to hold ourselves accountable to the skill development that we promise.

Being able to leverage the knowledge, processes and experience of the folks in our Driveline R&D division is a tremendous advantage that is unique to our Academy. I can’t wait to see what type of game changing insights we’ll get over time. Fires me up!

In addition to holding true to our ethos of data-driven player development, gathering data with our Driveline Academy teams specifically helps with each of the 3 pillars of Driveline Academy:

Providing athletes with feedback on how they’re getting better incentivizes them to keep doing what they’re doing and adds a gamification component that keeps training and playing fun. It also allows us to provide feedback for both the athlete and parent long term on how we’re doing on pillars two and three:

In addition to the immediate benefits, our data collection efforts also allow us to understand trends in youth data across a robust sample of different ages and (especially in a couple years) to gather longitudinal data showing how athletes progress over several years of their development.

While tracking technology delivers data on a variety of metrics, we’ve found the most utility by focusing on the power-output metrics—the skills that scale (thrown ball velocity, bat speed, and batted ball exit velocity). This works with our youth athletes as well as with our higher level athletes (though we’ll incorporate other metrics for fine-tuning skill development with older athletes).

For this analysis, we consider all the data we have for our Academy athletes.

For bat sensor data, this will include a variety of training environments (front toss, pitching machine, Live ABs) as well as in-game data for some athletes who wore their sensor during games.

And for batted ball data, that will only include training and Live AB data from the facility, as that’s when our athletes will hit on HitTrax. This is relevant in that the competition level of in-game pitching and pitching machines used in training will differ some between different age groups.

For pitching velocity, we draw from bullpens, live ABs, and in-game velos for athletes.

Looking across different age groups, we can get an idea of how athletes age on average. Note that this is comparing between different athletes, so we have to assume that our teams of athletes are at roughly the same talent level for their age (relative to the population of all athletes).

We’ll expect to see some variation from the average progression of athletes (you may happen to have a 14U team that’s on average more physically developed than others, just by chance), so we smooth out the curve to clear out some of that variability to get the average shape across all the teams.

As referenced above, we see some variability on a per team basis, but on average each year of increase in age corresponds with about a 2.5 mph gain in bat speed (this drops off very slightly to 2.3 at the higher end, but seems to hold fairly steady across the range from 9U to 16U).

Looking at fastball velocity, we see more curvature to the aging curve than we saw with bat speed. That is, the expected average per year increase in fastball velocity drops off more than bat speed does, going from around 5 mph for 9U-11U players to around 3 mph for 14U-16U players.

Looking at Max Batted Ball Exit Velocity (note that we had a smaller sample of 9U batted ball data so excluded them here):

On average, we see the median player having a max EV that’s 3-6 mph higher for each year increase in age (with the lower increases being for the older athletes).

Variability by Age – and full distributions

In addition to just tracking the average change, we can also look at the spread of metrics for each team/age group to get an idea of how much they vary and where different numbers would fall:

Each dot represents a player’s average fastball velo. So a 12U player who averages 55mph in their bullpen would be in the middle of the pack for our team.

The other factor that’s especially important when considering the distribution of youth athlete metrics is that an athlete’s skill at a given age is a combination of physicality and technical ability.

We may see two 13U athletes with the same metrics (and thus profile as above average), but one does so while having four inches and 30 lbs. on the other, who makes the most of his current physicality.

This is also true of higher level athletes (we may have a 6’4, 220-pound athlete throw 93 mph just like a 5’11, 180-pound athlete), but because this difference is more permanent for older athletes, rather than a product of when they grow, it’s less confounding in terms of understanding where they stand relative to their peers.

All that is to say that a youth athlete may profile at a lower percentile than their technical competency would suggest, due to their current level of growth, so it is another factor to weight when using these distributions. 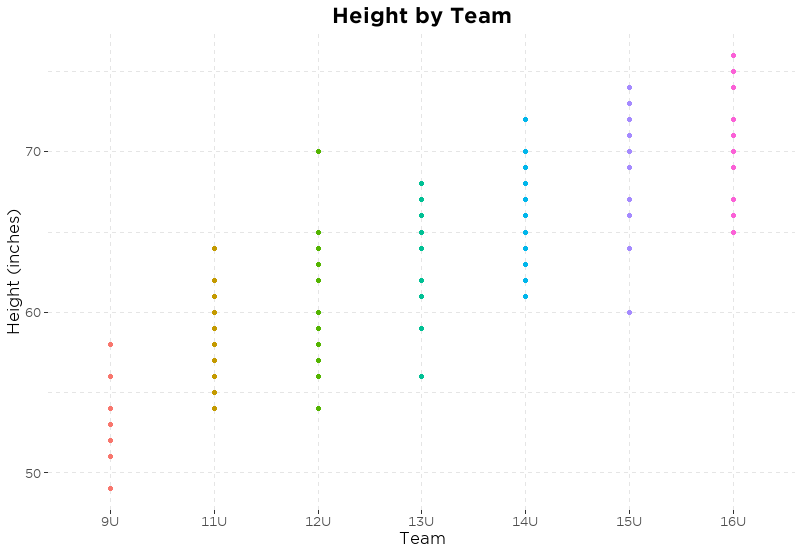 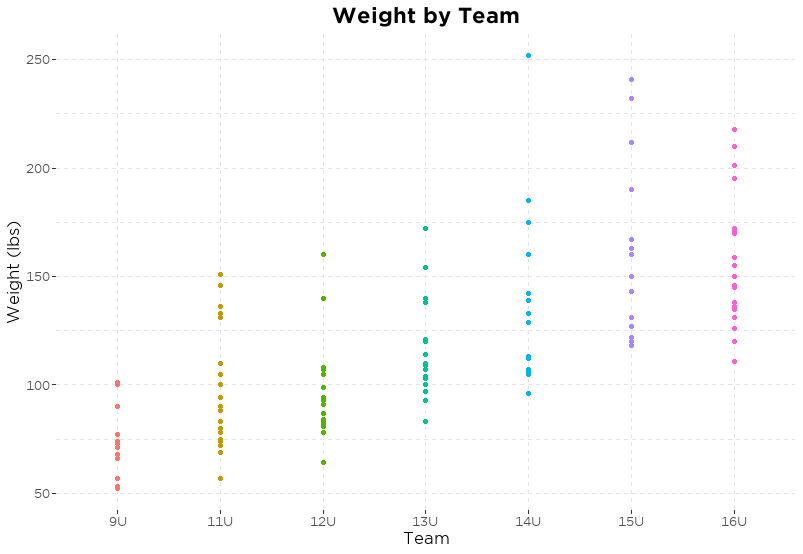 On the whole, we’re very excited about how the longitudinal research opportunities the data we’re collecting will help us understand how youth baseball players develop over a period of years.

We’re also excited to see and provide evidence of how our players have been developing to keep baseball fun for them while also giving them an opportunity to play for as long as possible.