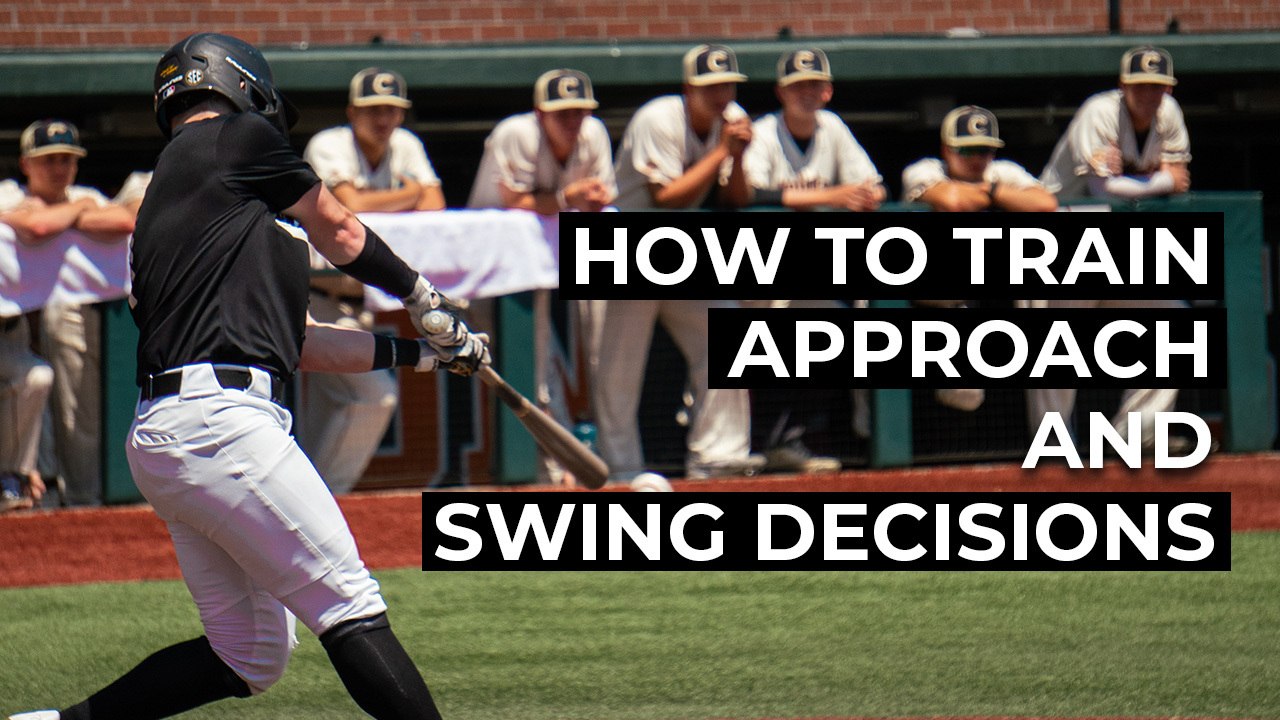 What is a hitting approach in baseball?

Approach: Your intent and thought process when you’re in the batter’s box.

A hitter’s approach will generally answer one of, a couple, or sometimes even all of these questions:

As hitters, we must understand that our intention determines our actions. The thoughts going through your head in the batter’s box will influence your mechanics and determine what pitches you do/don’t swing at. Maybe most importantly, the thoughts rattling around in your head while the pitcher winds up will significantly impact how fast you swing the bat. When we teach approach with our hitters at Driveline, our first step is breaking up counts into two distinct states:

The rest of the blog will cover how hitters can develop both baseball-hitting approaches.

A hitter’s count is any count where there are not two strikes. Yes, I repeat, any non-2-strike count is a hitter’s count. Here’s why: with less than two strikes, our goal as hitters is to hit something as hard as we possibly can, in the air or on a line. When you swing the bat in the hitter’s counts, ensure you are swinging for maximum damage.

Swinging hard and trying to crush baseballs meets the criteria for being labeled as a “hitter’s count.” Another bonus of hitter counts is if you swing and miss, guess what, you don’t strike out. That is why we classify any count that is not two strikes as a hitter’s count. When we approach hitter’s counts, we want to prioritize these four things:

Going one step further, we tell our college and professional hitters to swing for “barrels.” A barrel is a batted ball type defined by Statcast as being hit over 98mph within launch angle ranges that have led to:

Check out this graphic to get a feel for these EV and LA ranges. Balls hit these EVs, and LA combinations are officially classified as barrels.

Good things happen when we hit the ball hard! The more barrels you produce in hitter counts, the better your stats will be. We know that these EV and LA combinations produce the highest expected values. We are giving ourselves the highest probability of success by designing our approach and mindset to optimize our swings to create batted balls within these ranges. Now that is what it means to be #DataDriven.

So the barrel formula can be a little complex, and we know that. To simplify and make this more actionable for coaches and players, we tell our hitters to hit the ball

The ranges of 8° and 37° are not arbitrary either. Balls hit lower than 8° can get caught by infielders, and balls hit higher than 37° get caught by outfielders. Set a weekly team goal to see how many balls your team and players can hit between these ranges. Create a leaderboard for your hitters and report on goal completion every week. You’d be surprised how much your hitters improve by trying to swing for barrels in hitter counts.

Any count that has two strikes, you guessed it…we classify it as a two-strike count. When we find ourselves in two-strike counts, our goal for what defines a productive outcome changes, and therefore our intent must shift to a two-strike approach. The game places a different set of demands on us, so it is no longer as advantageous to swing for the fences. Instead, we must deploy a new approach. One centered around making more contact and ideally at lower launch angles.

In 2 strike counts, our hitting approach changes because if we swing and miss or take a strike, then we’re out. The conditions of the game require an intent change. Hitters intuitively know this and remodel their approach in two-strike counts. League-wide two-strike adjustments result in the following outcomes:

You swing at more pitches, which means you swing at pitches you don’t hit as well. This decreases the smash factor on contact.

Ideally, we want to hit the ball as close to 12° as possible because that’s where BABIP peaks, but any contact is still a win. To accomplish these objectives, we instruct hitters to implement the following approach change with two strikes.

Sit on the high fastball and try to hit a line drive up the middle. Sitting on the high fastball helps hitters make contact against the elevated 4-seam (a very common pitch in MLB with two strikes nowadays). The lower ball flight goal promotes a flatter swing path, which produces lower ball flight. Aiming up the middle allows the hitter to deepen their point of contact, which means more time for decision-making. A deeper POC also means lower attack angles, and lower attacks help produce…lower ball flight!

Working a top-down, up-the-middle line drive approach helps hitters make more contact at lower launch angles, while the deeper point of contact gives them more time to decide if they want to swing or not. A third benefit of sitting on the high fastball is that it helps hitters lay off low-breaking pitches. Set your sights on the high fastball, and all of a sudden, the low and away slider becomes less appealing. We’ve had many anecdotal successes with hitters implementing the top-down approach with two strikes. They almost all cut their K% by a substantial margin and talk about how setting their sights higher helps them lay off the low offspeed pitch. Don’t believe me? Try it in your next game, and let us know how it went in the comments below!

When it comes to two-strike counts, a good goal to set for your hitters is:

Have over 60% of two-strike at-bats end in a ball in play, walk, or hit by pitch

If you meet that 60% threshold, then you’re doing a great job of executing this two-strike approach. Watch your traditional stats – AVG/OBP/SLG – shoot up because you’re putting more balls in play. Think of it this way, every ball you put in play with a solid two-strike approach is a scratcher lottery ticket. Sometimes you’ll win, and sometimes you’ll lose. But if you never buy a lottery ticket in the first place, meaning you struck out instead of putting the ball in play, your chances of winning are 0%. Good things happen when we put the ball in play with two strikes!

In hitter’s counts, swing for barrels. To make this simple, effective, and actionable, track how many balls you can hit >= 98mph and between 8-37°. Set weekly team and player goals, then go from there.

In two-strike counts, make sure you change to your two-strike approach! Sit on the high fastball, take a flatter swing, and try to hit line drives at 12° up the middle. If you want to hack the game of baseball, get as close to the plate as the umpire will let you go and wear anything that comes inside.

Let the count dictate which intent and swings you deploy. But make sure you practice in an environment that requires you to implement and shift between both approaches. If you’ve played the game of baseball, then you know how quickly 0-0 can become 0-2. When the game takes you from a hitter’s count to a two-strike battle, make sure you’ve practiced shifting your mindset to the point where that transition is second nature!

Frequently Asked Questions about Choosing a Hitting Approach in Baseball

What if I have a player who whiffs a lot, and I have another player who makes a ton of contact, shouldn’t their approaches be different?

Yes, they should, but the principles of hitting the ball as hard as you can in the hitter’s counts and executing the top-down two-strike approach do not change. The main thing that changes is their aggressiveness in the hitter’s counts. High whiff guys should be told to swing more in hitter counts, even if this means swinging at a larger area of pitches. Due to their higher whiff%, we want these hitters to be getting more swings off because their chances of making contact are lower in both hitters and 2K counts.

With high-contact guys, they can afford to swing less and be pickier in hitter counts, think Max Muncy or Juan Soto. When good contact hitters find themselves with two strikes, we are confident in their ability to put the ball in play more often than we are with the high whiff% player.

Swinging less can’t actually be a favorable strategy for hitters…can it?

Tom Tango on the run values of takes – Twitter

Even better, the median miss distance per pitch in the MLB is 11″. This means pitchers miss their intended target by 11″ every time they throw a baseball. Home plate is only 17″ wide…pitchers are missing by more than half of home plate every time they throw a pitch! Think about that for a minute. Not to mention 11″ is the median miss distance for MLB pitchers. The arms you’ll be facing probably miss by an even bigger distance. Be patient and hunt your pitch!

This is a good question, but in hitter’s counts, we need to focus on one thing: DOING DAMAGE. If you optimize your approach just to put the ball in play, it becomes very difficult to create unique value. If you aren’t hitting home runs or doubles, then you are relying on your ability to strike out less than everyone else, hit more line drives than the rest of the league, or beat out more infield singles than everyone else. Separating yourself by becoming elite at one or multiple of these is extraordinarily difficult. That is why you only see a handful of Steven Kwan, Luis Arraez, or Nick Madrigal type profiles each year at the MLB level. Training players to be elite contact makers is very difficult (for now).

A suboptimal strategy with a somewhat low ROI because, as I mentioned earlier, creating unique value is very difficult if you aren’t hitting the ball over the fence.

Instead, focus your training and practice time on swinging faster and hitting the ball harder, IN ADDITION to improving bat-to-ball skills.

Should I crowd the plate with two strikes?

Does this approach work against all pitchers?

This is a highly individualized question and one that must take into account a lot of moving parts. With that being said, the simple answer is yes, it does. The adjustment I would advocate for occurs when the opposing pitcher has poor command. If a pitcher has poor command, instructing your hitters to look for a pitch in a smaller zone can be very advantageous because we know the odds of this pitcher consistently throwing strikes is very slim.

By hunting a smaller zone, hitters will swing at fewer balls and maybe even take some strikes. However, when pitchers have bad command, we are betting on the probability that he won’t be able to throw strikes. In reality, your team will most likely end up walking a lot. Although not the most exciting outcome for a plate appearance, walks are a very productive outcome for any hitter at bat.

Athlete Questionnaire: Fill out this link